Fasting Across the Divine Scriptures 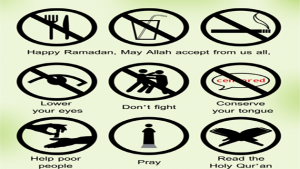 Fasting is one of the major acts of worship which are observed by the followers of all Abrahamic religions.

It goes without saying that fasting is one of the major acts of worship which are observed by the followers of all Abrahamic religions. However, the followers of each religion have their own form of fasting, but they still have many practices and beliefs in common when it comes to fasting.

For example, as far as sincerity is concerned, we notice that all divine religions stress the importance of sincerity with regard to fasting. They prohibit showoff in matters of worship in general and fasting in particular.

The New Testament tells the Christians to hide their fasting and intend it for God only so that they will receive reward for it. In the Bible, we read the following verses: “And when you fast, do not look gloomy like the hypocrites, for they disfigure their faces that their fasting may be seen by others. Truly, I say to you, they have received their reward. But when you fast, anoint your head and wash your face, that your fasting may not be seen by others but by your Father who is in secret. And your Father who sees in secret will reward you.” (Matthew 6:16-18)

In the Islamic scripture, we come to know that fasting is the only act of worship which cannot be done for the purposes of showoff since fasting cannot be seen or monitored. Ibn Shihab reports that Prophet Muhammad (peace be upon him) said: “There is no showoff in fasting” (Al-Bayhaqi)

Prophet Muhammad quotes God as saying: “Every act of the son of Adam is for him, except fasting, which is (exclusively) for Me, and I will reward him for it…” (Al-Bukhari and Muslim)

As a matter of fact, according to the three Abrahamic religions, fasting has special etiquette, and what is more it can be valid only if it is associated with the observance of other acts of worship and abstinence from certain prohibited acts and statements.

For example, during fasting in particular and at all times in general, wickedness and oppression must be avoided. Besides, the hungry must be fed, the homeless poor must be taken in, the naked must be covered.

The Old Testament tells us that the fasting during which man’s pleasure is sought and workers are oppressed is not valid. It also states that if a fasting person quarrels or fights with others, he will not be able to make his voice heard to Heaven and so his fasting will not be acceptable to God.

In the Bible, we read: “Why have we fasted, and you see it not? Why have we humbled ourselves, and you take no knowledge of it? Behold, in the day of your fast you seek your own pleasure, and oppress all your workers. Behold, you fast only to quarrel and to fight and to hit with a wicked fist. Fasting like yours this day will not make your voice to be heard on high. Is such the fast that I choose, a day for a person to humble himself? Is it to bow down his head like a reed, and to spread sackcloth and ashes under him? Will you call this a fast, and a day acceptable to the Lord? Is not this the fast that I choose: to loose the bonds of wickedness, to undo the straps of the yoke, to let the oppressed go free, and to break every yoke? Is it not to share your bread with the hungry and bring the homeless poor into your house; when you see the naked, to cover him, and not to hide yourself from your own flesh?” (Isaiah 58:3-7)

The Islamic scripture lets us know that during fasting man must not seek one’s own pleasure. Rather, he/she must seek God’s pleasure only and restrain his/her own sensual pleasures by refraining from having food, drink or sexual intercourse as I indicated above. During fasting, Muslims are allowed to eat, drink and have sexual intercourse at night only: from dawn to sunset.

And eat and drink until the white thread of dawn becomes distinct to you from the black thread [of night]. (Al-Baqarah 2:187)

Prophet Muhammad said: “Fasting is a shield. When anyone of you is observing fast, he should neither indulge in obscene language nor should he raise his voice; and if anyone reviles him or tries to quarrel with him, he should say: ‘I am fasting.’” (Al-Bukhari and Muslim)

As for sharing bread with the hungry, the fasting of a Muslim cannot be accepted unless alms are given before the end of the holy month of Ramadan. There are special alms that must be given during Ramadan to feed the hungry, called “Zakat al-Fitr” (breakfast alms).

Ibn `Umar reported that the Messenger of God (peace be upon him) imposed Zakat al-Fitr for Ramadan in the amount of one Saa` (a unit of measurement which is equivalent to three kilograms) of dates or one Saa` of barley on the slave and free, male and female, young and old Muslims, and ordered that it be given before people went out to pray (the Feast Prayer at the end of Ramadan.)”

Moreover, feeding the hungry served as expiation for breaking fast by those Muslims who cannot observe fasting.

And upon those who are able [to fast, but with hardship] – a ransom [as substitute] of feeding a poor person [each day] is imposed (Al-Baqarah 2:184)

Concerning taking in the homeless poor, covering the naked and any other charitable acts, Muslims are recommended to do as many charitable acts as possible while fasting throughout Ramadan. It is reported that Prophet Muhammad (peace be upon him) was the most generous of all people and he used to reach the peak in generosity in the month of Ramadan when he meets Angel Gabriel. Gabriel used to meet him every night of Ramadan to teach him the Qur’an. Prophet Muhammad (peace be upon him) when Gabriel met him was even more generous than the strong uncontrollable wind (in readiness and haste to do charitable deeds) (Al-Bukhari)

Muslims are instructed to clothe, accommodate and shield one another in Ramadan in particular and at all times in general. Prophet Muhammad (peace be upon him) said: “If anyone relieves a believer of one of the hardships of this worldly life, God will relieve him of one of the hardships of the Day of Resurrection. If anyone makes it easy for the one who is indebted to him (while finding it difficult to repay), God will make it easy for him in this worldly life and in the Hereafter. If anyone shields a Muslim, God will shield him in this world and in the Hereafter. God helps His slave as long as he helps his brother.” (Muslim)

To conclude, though the form fasting assumes differs from one Abrahamic religion to another, such religions still share basic etiquette of fasting. For example, all Abrahamic religions require sincerity for fasting, associate it with certain acts of worship and stipulate that certain prohibitions are shunned.