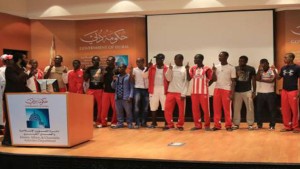 The entire team was impressed by the peace and serenity they felt in Islam.

Heading to the rich gulf emirate for a two-month training camp, none of the twenty-three young Cameroonian footballers imagined that their journey to Dubai would end surprisingly into making all of them revert to Islam.

“It is amazing that at an age when most people just want to play and have fun, these young men were searching for faith and enlightenment,” Javeed Khateeb, senior religious adviser at IACAD, the Islamic Affairs and Charitable Activities Department in Dubai, told The National newspaper.

“This is the first time we’ve had such a large number of people from the same group wanting to convert.

“We do get large groups of converts but usually they come from different backgrounds,” he added.

The team from the West African country represents a football academy for the homeless, orphans and impoverished youth.

Coming to Dubai for training camp, the entire team was impressed by the peace and serenity they felt in Islam.

Moreover, they have also praised the kindness they received from Muslim players they trained with.

“They were very impressed with the way Muslims behaved, but mostly they were impressed by the kindness and respect they received,” Khateeb said

“These are poor young men and they were embraced like brothers.”

Having expressed their interest in Islam to their hosts, the squad, its coach and female priest were all taken to IACAD to learn more about Islam last Thursday, Sept. 11 and returned home last Saturday.

“We spent two separate sessions, which were about a full day each, talking about Islam and answering all their questions and alleviating any doubts,” Khateeb said.

“We wanted to make sure they had proper understanding of Islam. Many of their questions were about halal and haram, consuming alcohol, and how the prophet Jesus is portrayed in Islam.”

“Two of them did not wish to convert, but they wanted to learn more about Islam and the culture before deciding what to do,” he added.

The Cameroonian squad was the latest group of visitors to IACAD who choose to revert to Islam at the center.

“The department has witnessed a lot of conversion cases of visitors and residents from different nationalities and most of them attribute their conversion to the tolerance and humane values and principles of Islam and the kindness they had from Muslims,” said Dr Hamad Al Shaibani, director general of IACAD.

The department organizes programs and events for non-Muslims and new Muslims to introduce the authentic, moderate message of Islam as a religion for all.

These take place in schools, shopping centers and cultural clubs.

Along with IACAD, Islamic Information Centre of the Dubai government-run Dar Al-Ber Society has witnessed a record of reversions to Islam over the past years.

Established more than 20 years ago, Dar Al Ber Society centre has witnessed the reversion of 20,000 from 200 different nationalities to Islam.