Difference of the Qur’an Narrations 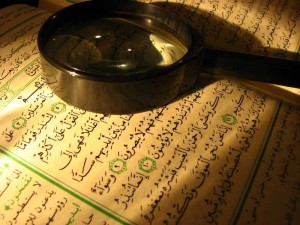 The Qur’an is the book of Allah revealed to the Messenger of Allah (peace be upon him) in different styles of recitation.

The Qur’an is the book of Allah revealed to the Messenger of Allah (peace be upon him) in different styles of recitation. Some allege that the Qur’an has been subject to distortion, an accusation with which Muslims charge the Gospel and the Torah. They attribute this to the companions of the Prophet claiming that they added and changed some words and chapters from the Qur’an. Those people rely on the actual differences between the Qur’an narrations that appear in some words or vowels.

There is no single word, even the smallest conjunction, but has been directly heard and narrated from the Prophet through authentic chains of transmitters. The companions were extremely honest and conveyed the Qur’an and the Sunnah with utmost accuracy and faithfulness. The point is that the Prophet asked Allah to reveal the Qur’an to him in numerous styles so that it will be easy for Arabs, who had a lot of dialects, to understand, and thus believe in it. Allah answered his supplication and revealed the Qur’an with different styles. Allah (Glory be to Him) says,

Scholars clarified that the difference of Qur’an styles is connected with the Arab dialects that were prevailing at the time of the Prophet (peace be upon him). Hence, it had been necessary that the Qur’an matched their styles and structures so that they could straightforwardly understand it and do not feel alienation with it. The Qur’an was so miraculous that it combined between eloquence and purity of language, and the concurrence with Arab dialects. The Qur’an has been able to capture the Arab’s hearts and made them bow to it out of respect. It became easier for them to study it, derive its rulings, act upon its orders, know its events, memorize and recite it.

However, the difference does not bring any kind of opposition or contradiction. Rather, it added to the eloquence and richness of the language of the Glorious Qur’an. Also, this helped scholars deduce additional, not contradictory, rulings and meanings. There are many examples of this one finds in the books of Tafsir (explanation of the Qur’an).

The differences found in the Qira’at of the Qur’an occur in the conjugation of verbs, the singularity, plurality and gender of words, the inflection, the vowel and the constant, the stress, the assimilation and the contraction, etc. We already have a branch of science called Al-Qira’at which studies and pursues these differences and provides the governing rules that help the learners easily memorize and understand them.

Indeed, there was no distortion or misrepresentation but the whole matter is divine. Every letter from the Qur’an is revealed by Allah (Glory be to Him). The wisdom is simply to make the Qur’an easily memorized, understood and recited.