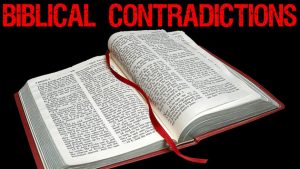 Discover the most important contradictions in the Bible

Therefore, some of the many proofs of the oneness of the source of the Qur’an and its sound ascription to God are the consistency, cohesion and coherence among its texts. About that, in the Qur’an, God says:

Then do they not reflect upon the Qur’an if it had been from [any] other than Allah they would have found within it much contradiction (An-Nisa 4:82)

On the contrary, when it comes to the Bible, some of the ample proofs of the multiplicity of its sources and the invalid ascription of a good deal of its contents to God are the remarkable contradictions, inconsistencies and discrepancies among its verses, chapters and books both in the Old Testament and the New Testament.

Download the Dictionary of Most Important Contradictions in Bible