Early Dialogue with the Followers of Jesus 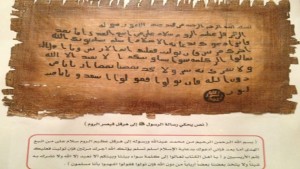 Although it was explained to them that Jesus was not divine, was not born to Allah, and was not a part of a divine trinity, they continued arguing until the following verse of the Qur’an was revealed:

Then whoever argues with you about it after [this] knowledge has come to you – say, “Come, let us call our sons and your sons, our women and your women, ourselves and yourselves, then supplicate earnestly [together] and invoke the curse of Allah upon the liars [among us].” (Aal `Imran 3:61)

Because of the word “nabtahil” in the verse, this event has been referred to as the “Mubahalah” or mutual cursing, an act in which each side asks Allah to curse their opponents if they are lying.

According to various commentaries:

When the Messenger of Allah recited this verse to the delegation from Najran and invited them to engage in the Mubahalah, they said, “Give us some time to return and reflect about the matter and we will come back to you tomorrow.” They met privately with one another and asked Aqib, their highest scholar among them, “O servant of the Messiah (Abd al-Masih), what do you think?” He said, “O Christians, by Allah you know that Muhammad is a prophet who has been sent and who has brought you the decisive word about your companion (i.e. Jesus). By Allah! No prophet has cursed a tribe except that its people, young and old, were destroyed. I see it best for you to remain in your religion and to return to your land.” The next morning, the Messenger of Allah arrived, carrying Husayn in one arm, while holding the hand of Hasan with the other. Fatimah was walking behind them, and behind her was `Ali. The Prophet told them, “When I call (for them to be cursed), you say, ‘Amen!’” The high priest of Najran said, “O Christians! If the faces I am seeing ask Allah to make a mountain disappear, Allah would do it! Do not engage in the Mubahalah, otherwise you will all die and no Christian would be left on earth until the Day of Judgment!”

So the Christians said, “O Abu Al-Qasim, we have decided not to curse you. Rather we will leave you alone with your religion while we remain on ours.” The Prophet said, “Now that you have avoided the Mubahalah, become Muslims so that what is to the benefit of the Muslims would be to your benefit, and what is their loss would be to your loss.” They declined. He said, “Then I will invite you to war.” They replied, “We do not have the ability to fight the Arabs. However, we will enter a treaty with you so that you would neither fight us in war nor threaten us, and so that you would not force us to abandon our religion. In return, we will pay two thousand coins, one thousand in the month of Safar and the other thousand in the month of Rajab.”

The Messenger of Allah made peace with them according to these terms. He then said, “By the One in Whose hand is my soul, divine punishment was close to take over the people of Najran. Had they engaged in the Mubahalah, they would have turned into apes and pigs and the land would have become fire for them! Allah would have extended this to all the inhabitants of Najran, even the birds on their trees, and this would have afflicted all Christians until they would all perish.” (Tafsir Thalabi 3:61)

Prophet Muhammad sent letters to many rulers of the world, inviting them to Islam. He sent ambassadors with such letters to Heraclius, the Ceasar of Byzantium, Chosroes II, the Khosrau of Persia, the Negus of Ethiopia, Muqawqis, the ruler of Egypt, Harith Gassani, the governor of Syria, Munzir ibn Sawa, the ruler of Bahrain and to the Maharajah of Kashmir.

The following are the texts sent to the Christian rulers:

To the Byzantine emperor

Letter of Prophet Muhammad to Heraclius

In the name of God, the Beneficent, the Merciful: (This letter is) from Muhammad, son of `Abdullah, to Heraclius the Great (ruler) of the Romans (Byzantines). Peace be upon him, he who follows the right path. Furthermore I invite you to submit your will to God; submit your will to God and you will be safe, and God will double thy reward, and if you reject, you bear the sins of persecuting Arians.

(And I recite to you God’s Statement:) (O Muhammad): ‘O people of the scripture! Come to a word common to you and us that we worship none but God and that we associate nothing in worship with Him, and that none of us shall take others as Lords beside God. Then, if they turn away, say: ‘Bear witness that we are Muslims’ (those who have surrendered to God).

To the king of Ethiopia

Letter of Prophet Muhammad to the Negus

In the name of God, the Beneficent, the Merciful: From Muhammad, the Prophet of Allah to the Negus, the king of Ethiopia: peace be on you, I thank God for you, The God, Who is no god but Him, the King, the Holy, the Guardian, and I witness that Jesus, the Son of Mary, is the Spirit of God and His Word. The word He gave to the pure, the believer “Mary”, and from this word she gave birth to Jesus. God made Jesus from His soul just as He made Adam with His hand. I invite you and your soldiers to believe in God, the Almighty. I wrote and advised you, so accept my advice. Peace be upon those who follow the right way.

To the Muqawqis of Egypt

Letter of Prophet Muhammad to the Muqawqis

“In the name of Allah, the Gracious, the Merciful. From the Messenger of Allah to the Muqawqis, Chief of the Copts. Peace be upon him who follows guidance. Next, I invite thee to the message of Islam: submit your will to God and you will attain peace. God shall give thee thy reward twofold. But if thou decline then on thee is the guilt of the Copts. O ye people of the Book, come unto an equal arrangement between us and you, that we should serve none save God, associating nothing with Him, and not taking one another for Lords besides God. And if ye decline, then bear witness that we are Muslims.”

Allah teaches Muslims in the Qur’an that when dialogue with non-Muslims reaches an impasse they should continue to do justice to them for religious disagreement does not justify injustice according to Islam.

So to that [religion of Allah] invite, [O Muhammad], and remain on a right course as you are commanded and do not follow their inclinations but say, “I have believed in what Allah has revealed of the Qur’an, and I have been commanded to do justice among you. Allah is our Lord and your Lord. For us are our deeds, and for you your deeds. There is no [need for] argument between us and you. Allah will bring us together, and to Him is the [final] destination.” (Ash-Shura 42:15)

Allah commands Prophet Muhammad to continue to make peace with non-Muslims who even insist on refusing conversion to Islam. Allah says:

And [Allah acknowledges] his saying, “O my Lord, indeed these are a people who do not believe.”