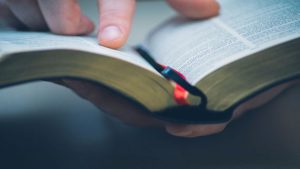 Does the Bible contain the Torah, the Injeel and the Zabur?

The followers of the divine messages believe that God sent messengers to people and that some of those prophets left behind Holy Scriptures God had revealed to guide people.

However, controversy rages among the followers of the divine messages over those scriptures in terms of, most importantly, whether or not they are free from the worldly blemishes and the human intervention, and less importantly, the correct names to be given to the contemporary versions of those scriptures many centuries after their revelation.

Muslims believe in all Holy Scriptures, mainly Torah, Injeel, and Zabur, beside Qur’an. But, they do not believe that those scriptures are included in Bible

It is bitter, old albeit renewed, controversy among the followers of the various divine messages, including Judaism, Christianity and Islam, which will never come to an end until the Judgment Day.

As Muslims, we may express our stance on the stated scriptures, how our faith in their divinity should look like and what names should be given to the current versions of those scriptures. We will handle those scriptures according to the historical importance of each of them:

Muslims believe that God sent down to Prophet Moses a holy scripture as a criterion dividing between right and wrong. In the Qur’an, God says:

And [recall] when We gave Moses the Scripture and criterion that perhaps you would be guided. (Al-Baqarah 2:53)

In the Qur’an, several references are made to the holy scripture sent down to Prophet Moses. It is sometimes referred to as “Suhuf” (sheets). In the Qur’an, we read:

Nay, is he not acquainted with what is in the sheets of Moses (An-Najm 53:36)

Moreover, in the Qur’an, Moses’ scripture is also referred to as “Alwah” (tablets). God says:

He said: O Moses! I have preferred thee above mankind by My messages and by My speaking (unto thee). So hold that which I have given thee, and be among the thankful. And We wrote for him, upon the tablets, the lesson to be drawn from all things and the explanation of all things, then (bade him): Hold it fast; and command thy people (saying): Take the better (course made clear) therein. I shall show thee the abode of evil livers. (Al-A`raf 7:144-145)

No matter what the exact name of the scripture revealed to Moses was, Muslims believe in it and its contents. Anyway, Muslims believe that “the Torah” is a generic name given to the revelation God sent down to Prophet Moses as a law, which prophets from the children of Israel even after Prophet Moses’ demise used for judgment among Jews. In the Qur’an, God says:

Indeed, We sent down the Torah, in which was guidance and light. The prophets who submitted [to Allah ] judged by it for the Jews, as did the rabbis and scholars by that with which they were entrusted of the Scripture of Allah, and they were witnesses thereto. So do not fear the people but fear Me, and do not exchange My verses for a small price. And whoever does not judge by what Allah has revealed – then it is those who are the disbelievers. (Al-Ma’idah 5:44)

Is the Torah the Same as the Old Testament or even the First Five Books?

Though Muslims believe in the Torah, they do not believe that the Torah is the same as the Old Testament or even the first five books thereof. Rather, Muslims believe that the original Torah has been distorted throughout centuries, and so numerous interpolations and omissions have been made until the first five books assumed the deplorably corrupted form they have for the time being.

As for the rest of the Old Testament books, they are not a part of the Torah revealed to Moses by consensus among Jews, Christians and Muslims. In fact, they are not more than annals of some prophets from the children of Israel which succeeded Moses. Such books may be quoted from some books revealed to prophets after Prophet Moses’ demise. However, there is no evidence for this probability which makes it difficult to believe that those books are from God either by wording or meaning.

Indeed, the evidence that the Torah is not the same as the Old Testament or even the first five books is uncountable:

* Human Narration rather than Direct Talk by God: when we read the Old Testament, we feel that a human being quotes God or narrates to us (Genesis 1:1), unlike the case in the Qur’an, where we feel that God directly talks to us.

* Neither the Old Testament nor the First Five Books were Written in Moses’ Lifetime: supposing that the Torah is the Old Testament or even the first five books thereof, that necessarily means that they, according to the Islamic concept, were revealed and written down, in their current form, in Prophet Moses’ lifetime. However, the conclusion of the last of the five books indicates that those books were written down only after Moses’ demise in times other than Moses’ (Deuteronomy 34:5-6).

* Contradictory Numbers in the Old Testament: for example, the number of Jacob’s family members who went to Egypt in Genesis (Genesis 46:26-27) contradicts those in Acts (Acts 7:14).

* Contradictory Historical Facts in the Old Testament: for example, the name of the buyer of the tomb of Jacob and his children in Joshua (Joshua 24:32) contradicts that in Acts (Acts 7:15-16).

* Excessive Violence & Brutal Killing in the Old Testament: the Old Testament books and chapters abound in terms and contexts excessively permitting and even inciting wrongful violence and killing. (Exodus 23:23-24), (Exodus 13:15)

Muslims believe that God sent down to Prophet Jesus a holy scripture called “Injeel”. In the Qur’an, God says:

And We sent, following in their footsteps, Jesus, the son of Mary, confirming that which came before him in the Torah; and We gave him the Injeel, in which was guidance and light and confirming that which preceded it of the Torah as guidance and instruction for the righteous. And let the People of the Injeel judge by what Allah has revealed therein. And whoever does not judge by what Allah has revealed – then it is those who are the defiantly disobedient. (Al-Ma’idah 5:46-47)

In Islamic terms, the Injeel, like the Torah and the Qur’an, is a scripture God revealed to Prophet Jesus. It was written down neither by Jesus nor his disciples nor the disciples of his disciples.

Is the Injeel the Same as the New Testament or even the Four Gospels?

Though Muslims believe in the Injeel, they do not believe that the Injeel is the same as the New Testament or even the four gospels thereof. In fact, the New Testament contents, including gospels narrating the biography of Jesus or books narrating the acts of Jesus’ apostles or containing their letters to people or dreams, are just man-made writings. They were written down neither by Jesus nor the disciples but by anonymous authors who were not contemporary with Jesus or his disciples and wrote about Jesus and his disciples in a language not spoken by Jesus or his disciples.

Indeed, the evidence that the Injeel is not the same as the New Testament or even the four gospels is uncountable:

* Long Interval between the Times of the Gospel Authors and the Times of Jesus & the Disciples: the New Testament involves numerous indications confirming that there was a long interval between the times of Jesus and the disciples and the times of the gospel authors (Luke 1:1-4), (John 21:24-25) and (Acts 1:1) amidst multitudes of fanciful tales about Jesus and his disciples. There is no clearer evidence than the fact that two out of the four gospels are attributed to Mark and Luke who were not disciples of Jesus. Furthermore, there is no single usage of the first person pronoun in the Gospel of Matthew indicating that it was written down by Matthew, the tax-collector, who was Jesus’ disciple. Only third person pronouns are used for the above-mentioned Matthew which confirms that he is not the author of the Gospel of Matthew. In the Gospel of John, no mention is made of any John except for John the Baptist. There is no evidence that John, Jesus’ disciple, is the author of this gospel. Besides, the four gospels and the Book of Acts involve indications that they were written down long time after the times of Jesus and the disciples. (Matthew 27:3-8), (Luke 1:1-4) and (Acts 1:1).

* Writings by People other than Jesus’ Disciples: epistles attributable to Paul and others are included in the Bible and considered the word of God though Paul and some epistle authors were not Jesus’ disciples.

* Human Narration rather than Direct Talk by God: when we read the New Testament, we feel that a human being quotes God or narrates to us, unlike the case in the Qur’an, where we feel that God directly talks to us.

* Multiplicity and Contradictions among Gospels: had the four gospels been from God, only one gospel would have been sufficient. Should there have been multiple gospels, they should have complemented rather than contradicted one another as the four gospels do.

* Having Dreams as the Word of God: the New Testament ends in the Book of Revelation, which contains dreams of John considered words of God

Muslims believe that God sent down to Prophet David a holy scripture called “Zabur”. In the Qur’an, God says:

Indeed, We have revealed to you, [O Muhammad], as We revealed to Noah and the prophets after him. And we revealed to Abraham, Ishmael, Isaac, Jacob, the Descendants, Jesus, Job, Jonah, Aaron, and Solomon, and to David We gave the Zabur. (An-Nisaa’ 4:163)

And your Lord is most knowing of whoever is in the heavens and the earth. And We have made some of the prophets exceed others [in various ways], and to David We gave the Zabur. (Al-Israa’ 17:55)

Is the Zabur the Same as the Book of Psalms in the Bible?

To conclude, Muslims believe in all Holy Scriptures, mainly the Torah, the Injeel, and the Zabur, not to mention the Qur’an. However, they do not believe that those scriptures are currently included in the Bible either for distortion and alteration like in the Torah’s case, or for loss and substitution with the word of man like in the Injeel’s case or for inclusion in an apparently man-made context which makes it open to corruption like in the Zabur’s case.