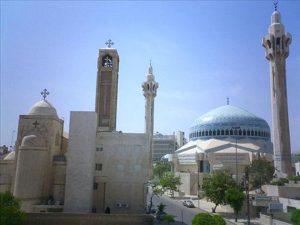 Peaceful Coexistence between Muslims and non-Muslims outside the Muslim world

Coexistence between Muslims and Non-Muslims outside the Muslim World

And if they incline to peace, then incline to it [also] and rely upon Allah. Indeed, it is He who is the Hearing, the Knowing. (Al-Anfal 8:61)

Except those who join a group between whom and you there is a treaty (of peace), or those who approach you with hearts restraining them from fighting you as well as fighting their own people. If Allah had pleased, He could have given them power over you, and they would have fought you: Therefore if they withdraw from you but fight you not, and (instead) send you (Guarantees of) peace, then Allah Hath opened no way for you (to war against them). (An-Nisaa’ 4:90)

Fight in the way of Allah those who fight you but do not transgress. Indeed. Allah does not like transgressors. (Al-Baqarah 2:190)

Muslims’ obligation to display justice towards non-Muslims is not waived even in times of war. For Muslims, wars do not justify injustice, oppression or transgression. According to the Islamic concept, war is just a state where Muslims have to carry and use weapons for self-defense purposes either inside the Muslim world or outside, in case of marching for the call to God.

The stated manners include the prohibition of pillage and the mutilation of dead bodies. Abdullah bin Yazid Al-Ansari reported: “The Prophet prohibited pillage and mutilation” (Al-Bukhari)

The above-mentioned etiquette also includes the prohibition of treachery and the call to belief in God and His Messenger before fighting. It is reported from Sulaiman bin Buraida through his father that when the Messenger of Allah appointed anyone as a leader of an army or detachment he would especially exhort him to fear Allah and to be good to the Muslims who were with him. He would say: Fight in the name of Allah and in the way of Allah. Fight against those who disbelieve in Allah. Make a conquest, do not embezzle spoils, do not break your pledge, do not mutilate (the dead) bodies, do not kill children. When you meet your enemies who are polytheists, invite them to three courses of action. If they respond to any one of these, you also accept it and withhold yourself from doing them any harm. Invite them to (accept) Islam; if they respond to you, accept it from them and desist from fighting against them. Then invite them to migrate from their lands to the land of the Immigrants and inform them that, if they do so, they shall have all the privileges and obligations of the Immigrants. If they refuse to migrate, tell them that they will have the status of Bedouin Muslims and will be subjected to the Commands of Allah like other Muslims, but they will not get any share from the spoils of war or Fai’ except when they actually fight with Muslims (against the disbelievers). If they refuse to accept Islam, demand the Jizya from them. If they agree to pay, accept it from them and hold off your hands. If they refuse to pay the Jizya, seek Allah’s help and fight them. When you lay siege to a fort and the besieged appeal to you for protection in the name of Allah and His Prophet, do not accord to them the guarantee of Allah and His Prophet, but accord to them your own guarantee and the guarantee of your companions for it is a lesser sin that the security given by you or your companions be disregarded than that the security granted in the name of Allah and His Prophet be violated. When you besiege a fort and the besieged want you to let them out in accordance with Allah’s Command, do not let them come out in accordance with His Command, but do so at your (own) command, for you do not know whether or not you will be able to carry out Allah’s behest with regard to them. (Muslim)

Prophet Muhammad reaffirmed the prohibition of treachery and betrayal. Amr ibn Al-Hamiq reported that the Messenger of God said: “Whoever gives a man security for himself and then kills him, I disown the killer even if the one killed is a disbeliever.” (Recorded by Al-Bukhari in At-Tarikh and At-Tabarani in Al-Mu`jam As-Saghir)

The above etiquette also includes the prohibition of any attack on the places of worship. Prophet Muhammad prohibited attacking the places of worship, specifically hermitages, or the worshippers therein. Ibn `Abbas reported that if Prophet Muhammad dispatched an army, he would instruct: “Go out in the name of God to fight in the cause of God against those who disbelieve in God, but do not act treacherously or dishonestly, do not commit mutilation, do not kill children or hermits.” (Recorded by Imam Ahmad)

The directives to protect and not to attack the places of worship and worshippers therein lasted even after the demise of Prophet Muhammad, especially during the caliphate of the four rightly-guided caliphs.

Upon dispatching Usamah ibn Zayd in command of an army to the Levant, Abu Bakr As-Siddiq, the first Muslim caliph, instructed: “… do not kill a young child, an old man or a woman. Do not chop down or burn palm trees. Do not cut down a fruitful tree. Do not slaughter an ewe, cow or a camel except for eating. You will pass by peoples retiring at hermitages. So leave them to what they are retired for.” (Ibn `Asakir 50/2)

The war etiquette also includes adherence to treaties and abstention from fighting except after the declaration of war and the abrogation of the treaty already concluded in case of the fear of betrayal. About this, the Qur’an says:

If you [have reason to] fear from a people betrayal, throw [their treaty] back to them, [putting you] on equal terms. Indeed, Allah does not like traitors. (Al-Anfal 8:58)

In the Qur’an, we also read:

Excepted are those with whom you made a treaty among the polytheists and then they have not been deficient toward you in anything or supported anyone against you; so complete for them their treaty until their term [has ended]. Indeed, Allah loves the righteous [who fear Him]. (At-Tawbah 9:4)

Sulaym ibn `Amir, a man of Himyar, reported: There was a covenant between Mu’awiyah and the Byzantines, and he was going towards their country, and when the covenant came to an end, he attacked them. A man came on a horse, or a packhorse saying: Allah is Most Great, Allah is Most Great; let there be faithfulness and not treachery. And when they looked they found that he was `Amr ibn Abasah. Mu’awiyah sent for him and questioned him (about that). He said: I heard the Messenger of Allah say: When one has covenant with people he must not strengthen or loosen it till its term comes to an end or he brings it to an end in agreement with them (to make both the parties equal). So Mu’awiyah returned. (Abu Dawud)

Coexistence inside the Muslim World