Jesus’ Disciples After His Demise

The disciples of Christ dispersed after his death in the lands, preaching his teachings. They were either wronged by Emperors or kings or were dealt justly and their teachings were welcomed. There were popes, patriarchs, bishops, monks and priests who took over religious posts in many Christian regions. Sometimes, they were influenced by different leaders’ respective religious backgrounds which were always influenced by pagan trends and rarely influenced  by the teachings of Arius who was influenced by Jesus’ monotheist and moderate teachings and rejected the divine nature of Jesus. Accordingly, fathers, bishops, and patriarchs were divided as to the real Christian doctrine and conflicts raised. 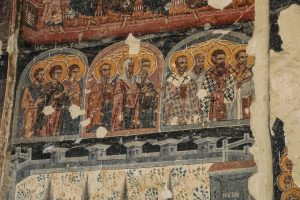 Therefore, calls for holding mass councils were also raised. Leaders forced religious clerics to find solutions to the problem to unify Christians upon one definite doctrine that should be upheld by ll Christians worldwide.

Clergy-Councils emerged by the order of the princes to establish a clear-cut doctrine for Christian societies where some of laws were approved and others were rejected. The councils, according to Shaykh Abu Zahrah, were claimed to be approved by the apostles although they were made about 22 years after the demise of Christ in Jerusalem.  And some councils rejected some of the Torah and the old-testament teachings.

The councils that constituted the Christian doctrine mounted to ten. In his book Hidayat Al-HayaraIbn Al-Qayim, mentioned them saying,

He said Saeed ibn Bitriq: Thirteen bishops met in the city of Antioch, and pondered over Paul’s doctrine. They cursed him and cursed those following him.

Other Caesars appeared in whose times, Christians were persecuted. At the time of King Constantine I, a great debate was made between a patriarch and saint Arius. The king and the attendees approved the sayings of the patriarch and suggested that Arius be banished and stemmed him with disbelief but the patriarch suggested that the king should summon patriarchs and bishops and hold a council to show reality of Arius and his doctrine to be denounced publicly.

One year and two months later, King Constantine I sent to all countries to summon bishops and patriarchs and two thousand and forty-eight bishops gathered in Nicaea. They were of different religious views. There were those hold Mary and Jesus to be gods and called Mariamaniya.

Others claimed that Christ’s position from the Father is likened to a torch taken from fire; the two flames are dependable after being separated and the fire’s flames will not decrease by such process.

They differed greatly that the king gathered the three hundred and eighteen bishops in a great council. He sat at the middle, and gave them his ring, his sword, and his stick and said, “You have the authority today on my Kingdom. Do whatever you want to do to save the Christian nation and strengthen it in religion and other affairs. They blessed the king, and gave him his sword, and said to him, “Support the religion of Christianity, and defend it”. They gave him forty books including Christian laws for bishops and laws for kings to rule with.

They agreed that the Christian Easter be on Sunday, after the Passover of the Jews, so that they may not gather on one day with the Jews, and denied bishops-marriage. The Council was made seventeen years of the reign of King Constantine I. They left the council while being dignified by the king who ordered that:

-The idols be destroyed and idols-worshipers be killed.

-There should not be in his government except the Christians. And leaders should be from them.

-The Friday after the Easter-Friday, should be off and peaceful.

Then Constantine perished, and Constantine II, his oldest son mounted the throne. In his time, Arius companions and those following him gathered and met with him. They praised the doctrine of Arius before him and pointed out that the three hundred and eighteen bishops of Nicaea were mistaken and misled when they uphold that the Son agrees with the Father in essence.

The advised him to discourage people from such doctrine because it was a fault, and the king determined to rectify the matter. However, Bishop of Jerusalem, discouraged him from following Arius’ companions, and claimed that they were misled and infidels for the three hundred and eighteen bishops cursed all of them. The king accepted the bishop’s saying.

It was fifty-eight years after the first council of Nicaea that another council was held. Ministers, leaders and commanders assembled before the king and said: People are consent with Arius and Maqedonius deviant sayings. So, write to all bishops and patriarchs to assemble and clarify for people real Christianity.

The king wrote to different regions to summon bishops. They were one-hundred and fifty bishops who gathered to think over Arius’ doctrine. They denounced Arius’s saying that  the Holy Spirit is created and not god.

The Patriarch of Alexandria said, “The Holy Spirit is not other than God’s spirit without which God cannot live. If we are to say that God’s spirit is created, His life would be created and if his life was created, He would not have been alive which is a blasphemous doctrine”.

They cursed those adopting such doctrine and many other doctrines and pointed out that the Holy Spirit is a creator and not created, a one-essence god who stems his nature from the Father and the Son.

They showed that the Father, the Son and the Holy Spirit are three Hypostases, faces and three properties. According to them, they are one in three i.e. trinity, and the body of Christ has a spirit which is reasonable and human.

The council was finished and they cursed many of their bishops and companions.

One and fifty years later, another council was held. It was the fourth council which was to think over Nestorius’ sayings. He claimed that Mary was not the mother of God but gods are only two the Father and the human who was from Mary an shared the name of the son of God but not really His son. Nestorius was cursed and banished at last.

Council of Ephesus II 449 A.D and the emergence of the doctrine of Jacobites.

The Council of Constantinople which approved the four councils after the Khalqdounian Councils.

Ninth Council: At the time of the Muslim Caliph, Muawiya ibn Abi Sufyan.

Tenth Council: When the king died, the sixth Council members met once again.

Commenting on these different councils Imam Ibn Qayyim said, “Christians had the tenth Council in which the Sixth-Council members gathered. They were objected, so the king summoned one hundred and thirty bishops who approved the Sixth-Council agreement and the five councils before it.  They cursed those disagreeing with them. Although those councils perished and those Christian misled-scholars died, their deviant teachings passed to the following generations who depended on them. Those councils, moreover, had about four-thousand Christian scholars of bishops, patriarchs and priests who disagreed and stemmed each other with disbelief”.

One may wonder at the Christians’ status-quo and ask: Is there a rational Christian who may ponder over such deviant situation by Christians who were divided into many sects which accuse each other of infidelity.

The human hands played the word of God with the approval of Christian clergies who assembled to approve heresy. Let the mercy of Allah (God) be upon the nation of Islam, which did not disagree on its scripture, Lord and Prophet, It was saved by Allah from being misled. Prophet Muhammad (may Allah’s peace and blessings be upon him) said, “My nation will not agree on heresy”. Its scriptures were also saved by the science of accurate narration through authentic narrators (Isnad) of prophetic hadiths (sayings).

Abu Zahra, Lectures on Christianity (looking at the stages by which the Christians beliefs passed whether through books, holy councils and sects), Dar al-Fikr al-Arabi – Cairo, 3rd ed, 1381 e – 1966.