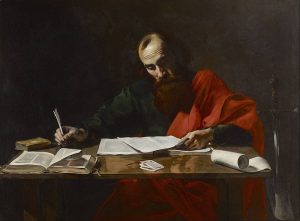 “But now we are delivered from the law, that being dead werein we were held; that we should serve in newness of spirit, and not in the oldness of the letter”. Saint Paul(Romans 7:6).

“Then the factions differed [concerning Jesus] from among them, so woe to those who disbelieved – from the scene of a tremendous Day.”(Qur’an 19:37).

Despite clear distortion of the word of God and such a monotheistic sincere message, there are some texts in the Bible testifying to the truth. When Jesus was asked advice, he replied,

Throughout history, the teachings of Jesus have been distorted and changed. It was fundamentally distorted by St. Paul.

St. Paul was a Roman-Jew who was born in Tarsus. He was of the Pharisees and was nicknamed Saul. It has been said that, he was hostile to Christians and used to oppress them and bring them for torment. St. Paul claimed that he saw Jesus “As he neared Damascus on his journey, suddenly a light from heaven flashed around him. He fell to the ground and heard a voice say to him, “Saul, Saul, why do you persecute me?”  “Who are you, Lord?” Saul asked. “I am Jesus, whom you are persecuting,”(Acts: 3-5)

Upon such incident, he followed Jesus and

St. Paul’s genealogy is still unknown to Christians. His biography, moreover, is only taken from his words. Apostles suspected him at first and though that he was a hypocrite until one of the saints assured them of his faith.

He continued to preach Christianity according to his doctrines until he was killed in the persecution of Nero in 66 or 67 AD.

Paul is credited with fourteen books of the New Testament which are called “Paul’s Epistles”. Upon writing them, he acquired great fame in Christianity and became the “Great Apostle”.

Are the Epistles of St. Paul Sacred?

Zonkilish, a Christian Protestant thinker, points out that, “Not all of what Paul wrote of Epistles is divine. He was mistaken in some them. Paul’s words, suppose their attribution to him, are not to be acceptable because he is considered one of the ‘liars’ who appeared in the first century despite being considered sacred by Christians”.

The Jesus of Paul is the “Son of God” who has been created from a human-divine nature which incarnated in a slave. He says,

“Rather, he made himself nothing by taking the very nature of a servant, being made in human likeness.”(Philippians 2:7).

“For what the law was powerless to do because it was weakened by the flesh, God did by sending his own Son in the likeness of sinful flesh to be a sin offering.[3] And so he condemned sin in the flesh, “(Romans, 8:3) , He also says,

“Not only so, but we ourselves, who have the first fruits of the Spirit, groan inwardly as we wait eagerly for our adoption to sonship, the redemption of our bodies.” (Romans 8:23).

Paul has changed Christianity categorically. The teachings of Jesus was complementary to the message of Moses. In Mathew (5:17). Jesus says,

“Think not I am come to destroy the law, or the Prophets. I did not came to destroy, but to fulfill”.

Nevertheless, Paul has mad Christianity a universal and full-fledged religion which is totally different from Moses’ teachings and stirred enmity between Christians and the Jews.

He abolished circumcision ruling and legalized what Jesus prohibited. He says,

“But now we are delivered from the law, that being dead werein we were held; that we should serve in newness of spirit, and not in the oldness of the letter”. (Romans 7:6).

Paul developed the doctrines of trinity crucifixion, incarnation, and redemption. He metaphysically construed the meanings of the gospels making Jesus God-incarnate.

And in the Epistle to the Hebrews(1:3) he says,

“(God) Hath in these last days spoken unto us by his Son, whom he hath appointed heir of all things, by whom also he made the worlds; Who being the brightness of his glory, and the express image of his person,  and upholding all things by the word of his power, when he had by  himself  purged our sins, sat down on the right hand of the Majesty on high”.

Thus, the Esauite left-over teachings have been mixed with Roman Hellenistic-gnostic ideas. In Encyclopedia of religion, we find that, “Paul was responsible for the historical categorical-and-dangerous reformation of Christianity through transforming it into a universal movement in the late 1st century to threaten the Roman Empire and become victorious over it “.

Pope P. Iliyas, says, “Paul left us a certain image of Christ which is different from that one in the Bible. The Christ of Paul is the Christ of faith and not the Christ known throughout history. No wonder, Paul did not see Jesus and was not one of his companions or apostles. His Christ is the son of Allah who has been created from a human-divine nature which incarnated in a slave!”.