Martinez Raised as a Christian

When Marilyn Martinez came back to San Antonio, she did not speak English. She was born in the U.S. but raised in Mexico as a Catholic. When her parents separated, she moved to Texas to be with her mother.

She attended college and earned an associate degree in dental assisting. 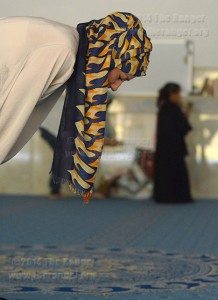 Martinez prays two rak`ahs before the Friday congregational prayer on Nov. 7 at the Islamic Center of San Antonio.

As Martinez watched the events unfold on television, she wondered why the media portrayed Arabs as terrorists and made Islam seem like a bad religion.

Several months later, in February 2002, she met her future husband, a Muslim from Saudi Arabia, through a barbecue and began to learn about Islam.

Few months later, they began dating for seven months; she accidentally walked into his room while he was praying. That was the first time she ever saw a Muslim praying.

After a year of dating she wanted to learn more about his religion; so he brought her books about Islam written in Spanish.

In 2005, she began wearing a hijab, a head covering, periodically.

Martinez recited her Shahada, a declaration of faith, in 2013 in the presence of a sheikh and several women from the Mosque and has been a Muslim for eight years, she said.

Shahada is a phrase upon which a person converts to Islam meaning that that there is only one god, Allah, and Muhammad is the Messenger of Allah.

Martinez did not have to change her religion to get married. In fact, she converted after she separated from her husband. She did it for herself, not for him, she said.

She and her husband were divorced because of their cultural differences, not religion, she said.

Now Martinez is a Muslim. “The new religion is different from how the media portrays it”, she says, .

She said her conversion to Islam helped her to be calm.

It helped her accept the new change to her life although not changing who she was!

Martinez says she is Mexican by heart and her religion is separate.

Her family, she says, respects her holidays and share her feelings. When she fasts during Ramadan, her whole family waits to break fasting with her at sundown.

She accepts Jesus was only a prophet, like Muhammad.

At Christmas, she celebrates with her family but does not participate in the Catholic rituals.

When she prays at home, she wears a garment that covers her body.

Although sometimes sad, Praying five time to Martinez, is calming and brings her inner-peace.

Muslim women must cover their hair, neck and arms to their wrists, and their legs to their ankles, otherwise the prayer won’t count, she said.

Martinez likes to cover up her body and wear hijab when out and she thinks that wearing hijab is not exclusive to Arabs, because it is a modest way of life. Wearing hijab does not stop her from being active, she says.

To keep track of prayer times, Martinez uses the “Adhan-app” as an alert to perform prayers at their relative times.

Martinez said her friends said, even-though she changed her religious belief, she has been the same person. But Martinez thinks that Islam made he live at peace with herself.
__________________
Source: theranger.org.