Brother Paul: It Takes Time to Learn What Islam Is about 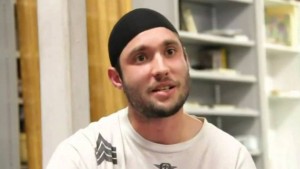 It was until too later that I could have fully understood what Islam is about.

My name is Paul, which is my given name, but my Muslim name is Farouq. I grew up in the city before I moved up to Austin. I went to a normal high school with a normal youth and normal people.

The first time I heard about Islam, or more correctly about Muslims, was from 9/11. I didn’t know what that meant, and I didn’t know it was related to Islam.  So I decided to conduct a research on it. I didn’t realize what Islam was, and even confused it with the turbans from other religion. It all mingled and seemed the same to me.

I was searching for the truth through different avenues, looking for what was right and what was wrong, what is the meaning of the wobbly wars around the world, why religion usually is at the base of wars, etc.

And I was trying to find the truth; the true cause of these wars. And then brother Martin said have a look at this Qur’an; there’s a lot of truth in it. And the why I was trying to find the truth was to disprove what was presented to me; to try to say ‘No, this is actually wrong’. I couldn’t do that with the Qur’an. I couldn’t find anything wrong in it. And Martin said: ‘look, there’s actually a lot of depth in this. He says, as I was in the Hebrew industrial metropolitan, ‘look deeper into it, there’s a meaning in that miracle.’

I took Shahadah (Testimony of Faith) in the mosque and shake hand with the imam at time. And I remember there were about four hundred people in the mosque. It was a very humbling moment.

At the time there was someone of the brothers behind me was crying. And I said, like a kid: ‘Well, why are you crying? It is a good thing that I’m converting to Islam.’ It was until too later that I could’ve fully understood what Islam is about. And to understand why they were crying helped me see that one-way myth.

At first when I was waking up for Fajr Prayer I feared my mad could hear the recitation of the Qur’an, and I kept saying ‘keep quite.’ He didn’t know at that time.

My dad was in the Vietnam War. He was very western and almost racist. So, for me to tell him I was Muslim I was just scared. So, I needed to prepare myself for it. I was leaving my dad’s house at that time.

It was for about two months until I told him. I embraced Islam in December and I wasn’t assure than about telling him I was a Muslim. Now, …