Bowing down and Prostration between Christianity and Islam 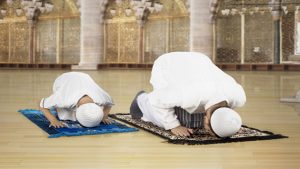 As a matter of fact, bowing down and prostration constitute the apex of submission, surrender and humility. That is why they are considered the most important manifestations of worship either in the divine or non-divine messages.

Not only do they involve bringing body down towards the ground, but also they serve as outright expressions of subjection and servility. The face, which is the most honorable part of the body, touches or closely approaches the soil.

A faith, heavenly or unheavenly, is seldom devoid of bowing down and/or prostration. It represents a very significant act of worship both in Christianity and Islam.

Bowing down and Prostration in Christianity

According to the Bible, both bowing down and prostration may be intended for both God and people. They may be made for God as an act of worship. In this case, they can be made solely for God.

However, in the Bible, bowing down and prostration were made for people as a greeting or as a token of respect. This was something permissible before the final message of Islam.

Nevertheless, we do not know if such prostration was full like the one made by Muslims or resembles bowing down by the head and/or the back.

Bowing down and Prostration for God in the Bible

About that, in the Old Testament, we read: “Because the Lord is jealous for his reputation, you are never to bow down to another god. He is a jealous God.” (Exodus 34:14)

We also read: “Thou shalt not bow down to their gods, nor serve them, nor do according to their works; but thou shalt utterly overthrow them and quite break down their images. And ye shall serve the Lord your God, and He shall bless thy bread and thy water; and I will take sickness away from the midst of thee.” (Exodus 23:24-25)

We further read: “Thou shalt not make unto thee any graven image, or any likeness of anything that is in heaven above, or that is in the earth beneath, or that is in the water under the earth. Thou shalt not bow down thyself to them, nor serve them; for I, the Lord thy God, am a jealous God, visiting the iniquity of the fathers upon the children unto the third and fourth generation of them that hate Me” (Exodus 20:4-5)

As for the New Testament, it quotes Jesus as saying: Then said Jesus unto him, “Get thee hence, Satan! For it is written: ‘Thou shalt worship the Lord thy God, and Him only shalt thou serve.’” (Matthew 4:10)

Bowing down and Prostration for People in the Bible

The Bible, including the Old Testament and the New Testament, abounds in numerous instances of bowing down and prostration for people as a greeting and a mark of honor.

For example, the Old Testament states that Prophet Lot bowed down to the angels. We read:

And there came two angels to Sodom at evening, and Lot sat in the gate of Sodom. And Lot, seeing them, rose up to meet them, and he bowed himself with his face toward the ground; and he said, “Behold now, my lords, turn in, I pray you, into your servant’s house and tarry all night, and wash your feet, and ye shall rise up early and go on your ways.” And they said, “Nay, but we will remain in the street all night.” (Genesis 19:1-2)

We also read: “And Abraham bowed himself down before the people of the land.” (Genesis 23:12)

As for the New Testament, it states that several people bowed down to Jesus as a mark of honor. For example, we read:

When Jesus came down from the mountain, large crowds followed Him. And a leper came up to Him and bowed down before Him, saying, “Lord, if You are willing, You are able to make me clean (well).” Jesus reached out His hand and touched him, saying, “I am willing; be cleansed.” Immediately his leprosy was cleansed. (Matthew 8:1-3)

Bowing down and Prostration in Islam

Either as an act of worship or a token of respect, bowing down and prostration are only made for God in Islam. They may not be made for anyone other than God.

For example, the Qur’an tells us that when God created Adam, He commanded angels to bow down/prostrate themselves before Adam as a mark of honor. We read:

And [mention] when We said to the angels, “Prostrate before Adam“; so they prostrated, except for Iblees. He refused and was arrogant and became of the disbelievers. (Al-Baqarah 2:34)

The Qur’an also tells us that Prophet Joseph’s brothers and parents bowed down before him as a mark of honor. We read:

And he raised his parents upon the throne, and they bowed to him in prostration. And he said, “O my father, this is the explanation of my vision of before. My Lord has made it reality. And He was certainly good to me when He took me out of prison and brought you [here] from bedouin life after Satan had induced [estrangement] between me and my brothers. Indeed, my Lord is Subtle in what He wills. Indeed, it is He who is the Knowing, the Wise. (Yusuf 12:100)

However, as for the final law of Islam brought forward by Prophet Muhammad, it prohibits all forms of bowing down and prostration for anyone other than God and singles them out for God only, without any partner.

About the commandment to bow down and prostrate for God in the Qur’an, we read:

O you who have believed, bow down and prostrate and worship your Lord and do good – that you may succeed. (Al-Hajj 22:77)

About the prohibition of prostration for anyone other than God in the Qur’an, we read:

And of His signs are the night and day and the sun and moon. Do not prostrate to the sun or to the moon, but prostate to Allah, who created them, if it should be Him that you worship. (Fussilat 41:37)

Also, Prophet Muhammad forbade bowing down or prostration for him in particular or anyone other than God in general. He was about to order a woman to bow down or prostrate for her husband given his considerable right over her, were it not for the strict prohibition of bowing down and prostration for anyone other than God in the final law of Islam.

Ibn Mas`ud described to us the scene which involved some Companions led by Ja`far ibn Abi Taleb and the Negus. He reported: Ja`far said to Muslims, “I will be your speaker today.” So, the Muslims followed Ja`far and when he entered to the king, he did not prostrate after greeting him. They said to Ja`far, “Why do you not prostrate before the king?” Jafar said, “We only prostrate for Allah, the Exalted and Most Honored.” They said, “Why?” He said, “Allah has sent a Messenger to us from Him, who ordered us not to prostrate to anyone except Allah, the Exalted and Most Honored. He also ordered to perform prayer and give charity…” (Imam Ahmad)

Islam prohibits bowing down and prostration not only for worship purposes, but also as a token of respect or a mark of honor.

Bowing down and prostration for anyone other than God for worship purposes is something prohibited every time and everywhere, either in the final message of Islam or the previous divine messages.

As for prostration as a mark of honor or a token of respect, it seems that it was permissible before Prophet Muhammad’s message given the angels’ prostration for Adam and prostration for Prophet Joseph by his parents and brothers.

Unfortunately, Christians bow down and prostrate themselves for Jesus as God and even images, statues, shrines, monks and priests.

Prophet Muhammad prohibited prostration both for him and others not only in lifetime but also after death. He forbade imitating the followers of the previous heavenly messages in prostration for the graves of their prophets and clergymen.

`A’ishah and Ibn `Abbas reported that Prophet Muhammad said: “May God curse (those of) the Jews and Christians who took the graves of their prophets as places for prostration.” By that he warned his followers of imitating them, by doing that which they did. (Al-Bukhari)

They have taken their scholars and monks as lords besides Allah, and [also] the Messiah, the son of Mary. And they were not commanded except to worship one God; there is no deity except Him. Exalted is He above whatever they associate with Him. (At-Tawbah 9:31)

Though Christians do not explicitly worship their monks, they do acts of worship for them, like prostration, though such acts are originally intended for God, the Lord, only. That is why they are deemed to worship their monks and priests.

Did Prophets Pray the Way Muslims Do?