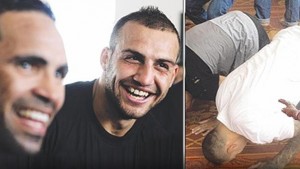 “He’s got the colour back in his face. He wants to be a better person but he’ll still have his faults, like we all do.” (Mundine)

Professional and once unsettled rugby player, Blake Ferguson, has apparently found the road.

After a life full of thorns, setbacks and anxiety, troubled rugby league star has found his road to rehabilitation, true salvation, peace and tranquility via Islam.

At Zetland Mosque, Sydney, on Friday the National Rugby League (NRL) bad boy have taken the Shahadah (Declaration of Faith), hoping it will help him put his career and whole life back on track.

He converted to Islam by the help of his fellow Muslim boxer Anthony Mundine.

The State of Origin star was photographed praying beside Mundine, who also helped rugby league superstar Sonny Bill Williams convert to the Muslim religion five years ago when Williams was going through a difficult period in his life.

For all his showmanship and madness, Mundine is a deeply religious person who genuinely cares for Ferguson and wants to help him realize his enormous potential in the NRL.

Ferguson declined to comment on Friday saying: “It’s private. I can’t talk about it, I’m sorry.”

Ferguson has previously made many failed attempts to give up alcohol – which is prohibited for a Muslim to drink.

Mundine revealed that the sacked and now unemployed Canberra Raiders star had been asking him about converting for almost six weeks.

“He’s thought about it and it’s a commitment he wants to make,” Mundine said. “But it’s up to Blake to speak about it when he’s ready.

“He’s just looking forward to changing his direction in life. At the moment he’s in good space – no drinking, no drugs, no parties.

“He’s got the colour back in his face. He wants to be a better person but he’ll still have his faults, like we all do.”

After a life full of thorns, setbacks and anxiety, troubled rugby league star has found his road to rehabilitation, true salvation.

Ferguson’s rugby league career has been in limbo for several months after he was dumped by the Raiders over a number of off-field incidents.

Another prominent Islamic sportsperson, boxer Billy Dib, congratulated Ferguson on Twitter on Saturday, writing on: “Proud of you my brother, so happy to see you taking the right steps to resurrect your footy career.”

Ferguson replied: “Thanks brother.. very hapoy with where im heading.. hooe your well.”

Dib then tweeted “all is well my bro, getting ready for the big fight inshallah.” to which Ferguson responded with “yeah my brother goodluck inshallah”.

Ferguson has had a troubled year in the NRL and is currently facing charges over the alleged indecent assault of a woman at a Cronulla nightspot. That matter is still before the courts.

Many of Ferguson’s misdemeanors have been alcohol-related, which makes his religious conversion such a significant step.

The Roosters’ Kiwi superstar Sonny Bill Williams, another close friend of Mundine’s, has said his Muslim faith has made him a better footballer. Ferguson will be hoping for a similar result.

Ferguson worked as a laborer after leaving Canberra but still hopes to return to the NRL. He was supposed to have had his first professional fight on the undercard for Mundine’s aborted fight against Mosley on October 23. He will enter the ring as one of the curtain-raisers for the fight night at All Phones Arena on November 27.

The player, who was once earning $400,000-a-year, is living at Mundine’s Hurstville home with the boxer and his mum.

He is now a $1 million-a-year superstar in NRL and rugby union.

Source: The Daily Telegraph and The Sydney Morning Herald