Is the Black Stone one of the idols? 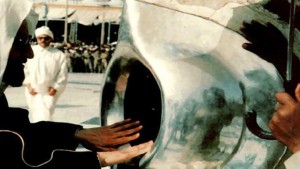 The Black Stone is a black oval stone placed in the foundation of the Ka`bah at the southeast part of it. It is recommendable to face and kiss it during Tawaf.

The Black Stone is a black oval stone placed in the foundation of the Ka`bah at the southeast part of it. It is recommendable to face and kiss it during Tawaf (circumambulation of the ka`bah). Ibn `Abbas narrated that the Prophet (peace be upon him) said, “The black stone was brought down from the Heavens. It was whiter than milk but the sins of people blackened it.” (Al-Tirmidhi) It is desirable to kiss, touch and wipe over it because it is a means of forgiveness. It is reported in the hadith, “Wiping over the (Black) Stone and Al-Rukn Al-Yamani puts the sins away.” (Ahmed)

The Black Stone got this status because Allah (Glory be to Him) commanded to hold it in esteem, and without this command, no one would give any attention to it.

Indeed, the whole Shari`ah is based on submission to the Will of Allah and accepting what the Prophet (peace be upon him) preached. Almighty Allah says,

And whatever the Messenger has given you – take; and what he has forbidden you – refrain from. (Al-Hashr 59:7)

It is not for a believing man or a believing woman, when Allah and His Messenger have decided a matter, that they should [thereafter] have any choice about their affair. (Al-Ahzab 33:36)

By the star when it descends, Your companion [Muhammad] has not strayed, nor has he erred, Nor does he speak from [his own] inclination. It is not but a revelation revealed. (Al-Najm 53:1-4)

One of the wisdoms of kissing of the Black Stone, Tawaf, throwing pebbles and other rituals of Hajj or `Umrah (minor Hajj) is to test people’s submission to Allah. A Muslim has to surrender to the commands of Allah and His Messenger (peace be upon him). The Law of Allah has prohibited the worship of stones, trees and idols. It enacted circumambulation around the Sacred House and kissing the Black Stone seeking the pleasure of Allah not the stones. For this reason, `Umar (may Allah be pleased with him) said, “Except that I saw the Messenger of Allah kissing you, I would not kiss you (i.e. the stone).” (Al-Bukhari)

Kissing the Black Stone is a symbolic act indicating love of the sacred places as Hajj is distinguished with symbolism. For example, throwing the pebbles is a symbol of resisting evil represented in Satan, and Muslim do so following the Prophet Ibrahim (Abraham, peace be upon him) who threw Iblis when he stood up to Ibrahim to deter him from slaughtering his son. So, we all throw pebbles inspiring that we throw the Satan and resist evil. Likewise, kissing and respect of the Black Stone involves the concept of connection between the Messenger of Allah and his nation. The Black Stone symbolizes a kind of material connection between the Prophet (peace be upon him) who used to kiss this stone and his nation that are ordered to kiss the same stone.

Anyway, the Orientalists believe that kissing the Black Stone is an act of idolatry and they neglected the whole facts about following the commands and submission to Allah. They disregard the fact that this is not done as worship of these things but to Allah, the Almighty.