Aminah Assilmi: Without Islam I’m Nothing 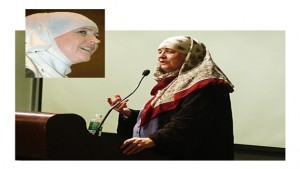 How Islam changed my Life?

‘How much more we love the light…if once we lived in darkness.’

When I first embraced Islam, I really did not think it was going to affect my life very much. Islam did not just affect my life. It totally changed it.

My husband and I, Aminah Assilmi, loved each other very deeply. That love for each other still exists. Still, when I started studying Islam, we started having some difficulties. He saw me changing and did not understand what was happening. Neither did I. But then, I did not even realize I was changing. He decided that the only thing that could make me change was another man. There was no way to make him understand what was changing me because I did not know.

After I realized that I was a Muslim, it did not help matters. After all, the only reason a woman changes something as fundamental as her religion is another man. He could not find evidence of this other man, but he had to exist. We ended up in a very ugly divorce. The courts determined that the unorthodox religion would be detrimental to the development of my children. So they were removed from my custody.

To me this was not a possible choice. If I renounce my Islam, I would be teaching my children how to be deceptive, for there was no way to deny what was in my heart. I could not deny Allah, not then, not ever. I prayed like I had never prayed before.

I left the courts knowing that life without my babies would be very difficult. My heart bled, even though I knew, inside, I had done the right thing. I found solace in Ayat Al-Kursi (verse of the throne):

Allah! There is no god but He – the Living, the Self-subsisting, Supporter of all. No slumber can seize him nor sleep. His are all things in the heavens and on earth. Who is there can intercede in His presence except as He permits? He knows what (appears to His creatures as) before or after or behind them. Nor shall they compass aught of His knowledge except as He wills. His throne does extend over the heavens and the earth, and He feels no fatigue in guarding and preserving them for He is Most High, the Supreme (in glory). (Al-Baqarah 2:255)

This also got me started looking at all the attributes of Allah and discovering the beauty of each one.

Child custody and divorce were not the only problems I was to face. The rest of my family was not very accepting of my choice either. Most of the family refused to have anything to do with me. My mother was of the belief that it was just a phase and I would grow out of it. My sister, the ‘mental health expert’, was sure I had simply lost my mind and should be institutionalized. My father believed I should be killed before placed myself deeper in Hell. Suddenly I found myself with no husband and no family. What would be next?

Most of my friends drifted away during that first year. I was no fun anymore. I did not want to go to parties or bars. I was not interested in finding a boyfriend. All I ever did was read that ‘stupid’ book (the Qur’an) and talk about Islam. What a bore. I still did not have enough knowledge to help them understand why Islam was so beautiful.

My job was next to go. While I had won just about every award there was in my field and was recognized as a serious trend setter and money maker, the day I put on hijab, was the end of my job. Now I was without a family, without friends and without a job.

In all this, the first light was my grandmother. She approved of my choice and joined me. What a surprise! I always knew she had a lot of wisdom, but this! She died soon after that. When I stop to think about it, I almost get jealous. The day she pronounced Shahadah, all her misdeeds had been erased, while her good deeds were preserved. She died so soon after accepting Islam that I knew her ‘book’ was bound to be heavy on the good side. It fills me with such joy!

As my knowledge grew and I was better able to answer questions, many things changed. But, it was the changes made in me as a person that had the greatest impact. A few years after I went public with my Islam, my mother called me and said she did not know what this ‘Islam thing’ was, but she hoped I would stay with it. She liked what it was doing for me.

A couple of years after that she called again and asked what a person had to do to be a Muslim. I told her that all person had to do was know that there was only One God and Mohammed was His Messenger. Her response was: ’Any fool knows that. But what do you have to do?’ I repeated the same information and she said: ’Well…OK. But let’s not tell your father just yet’.

Little did she know that he had gone through the same conversation a few weeks before that. My real father (the one who thought I should be killed) had done it almost two months earlier. Then, my sister, the mental health person, she told me that I was the most ‘liberated’ person she knew. Coming from her that was the greatest compliment I could have received.

Rather than try to tell you about how each person came to accept Islam, let me simply say that more members of my family continue to find Islam every year. I was especially happy when a dear friend, Brother Qaiser Imam, told me that my ex-husband took Shahadah. When Brother Qaiser asked him why, he said it was because he had been watching me for 16 years and he wanted his daughter to have what I had. He came and asked me to forgive him for all he had done. I had forgiven him long before that.

Now my oldest son, Whitney, has called, as I am writing this book, and announced that he also wants to become Muslim. He plans on taking the Shahadah as the ISNA Convention in a couple of weeks. For now, he is learning as much as he can. Allah is the Most Merciful.

Over the years, I have come to be known for my talks on Islam, and many listeners have chosen to be Muslim. My inner peace has continued to increase with my knowledge and confidence in the wisdom of Allah. I know that Allah is not only my Creator but, my dearest friend. I know that Allah will always be there and will never reject me. For every step I take toward Allah, He takes 10 toward me. What a wonderful knowledge.

True, Allah has tested me, as was promised, and rewarded me far beyond what I could ever have hoped for. A few years ago, the doctors told me I had cancer and it was terminal. They explained that there was no cure, it was too far advanced, and proceeded to help prepare me for my death by explaining how the disease would progress. I had maybe one year left to live. I was concerned about my children, especially my youngest. Who would take care of him? Still I was not depressed. We must all die. I was confident that the pain I was experiencing contained blessings.

I remembered a good friend, Kareem Al-Misawi, who died of cancer when he was still in his 20′s. Shortly before he died, he told me that Allah was truly Merciful. This man was in unbelievable anguish and radiating with Allah’s love. He said: ‘Allah intends that I should enter heaven with a clean book’. His death experience gave me something to think about. He taught me of Allah’s love and mercy. This was something no one else had ever really discussed. Allah’s love!

I did not take me long to start being aware of His blessings. Friends who loved me came out of nowhere. I was given the gift of making Hajj. Even more importantly, I learned how very important it was for me to share the truth of Islam with everyone.

It did not matter if people, Muslim or not, agreed with me or even liked me. The only approval I needed was from Allah. The only love I needed was from Allah. Yet, I discovered more and more people, who, for no apparent reason, loved me. I rejoiced, for I remembered reading that if Allah loves you, He causes others to love you. I am not worthy of all the love. That means it must be another gift from Allah. Allah is the Greatest!

There is no way to fully explain how my life changed. Alhamdulillah! I am so very glad that I am a Muslim. Islam is my life. Islam is the beat of my heart. Islam is the blood that courses through my veins. Islam is my strength. With Islam my life is so wonderful and beautiful. Without Islam, I am nothing and should Allah ever turn His magnificent face from me I could not survive.

“Oh my Lord! Forgive my sins and my ignorance and my exceeding the limits (boundaries of righteousness) in all my deeds and what you know better than I. O Allah! Forgive my mistakes, those done intentionally or out of my ignorance or (without) or with seriousness, and I confess that all such mistakes are done by me. Oh Allah! Forgive my sins of the past and of the future which I did openly or secretly. You are the One who makes the things go before, and You are the One who delays them, and You are the Omnipotent.” (Al-Bukhari)