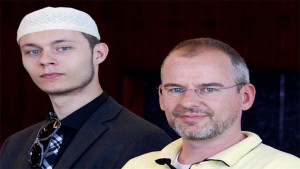 Iskander with his father Arnoud.

Arnoud van Doorn’s son, Iskander Amien De Vrie, was one of the 37 people who converted to Islam during the Dubai International Peace Convention. The son of Arnoud van Doorn, the famous Dutch policy maker and distributor of an anti-Islam film Fitna (Sedition), that caused unrest in 2008, surprised the audiences at the three-day Dubai International Peace Convention by  embracing Islam. “I bear witness that there is no God to be worshipped but Allah and I bear witness that Muhammad (peace be upon him) is His worshipper and last messenger,” said Iskander in his Shahadah (Testimony of Faith) to become a Muslim.

In the Father’s Footsteps

Arnoud van Doorn shot to fame in 2008 as one of the names associated with the anti-Muslim film Fitna, which was released in 2008. The film promoted misconceptions about Islam and Arnoud was one of the film’s distributors. Five years later, Arnoud was a changed man having learned more about Islam, which he today calls as ‘a religion of peace’. He converted to Islam after learning more about the religion and his decision shocked the world. “I saw my father become more peaceful after converting to Islam. That’s when I realized there is something good in this religion and it made me change my perception of Muslims. I started studying the Qur’an and going through lectures of important scholars,” said Iskander in an interview with Khaleej Times. Iskander, 22, credited his college friend Younis for setting a good example of what Muslims really are and how they live their life. “My friend Younis is a good practicing Muslim who taught me something new every day. He was patient with me and there was no way I could be rude to him,” said Iskander. Iskander also drew inspiration from his father’s life and how he underwent a transformation to become a more peaceful person.

Talking about the anti-Islamic movie Fitna, Arnoud called it a “mistake”, which he deeply regretted. “There is a misconception among people that I produced the movie Fitna, but I wasn’t involved in it. I was only responsible for distributing the movie. Today, it is something that I deeply regret.” Arnoud hopes to produce a movie about the righteousness preached in Islam and correct his earlier “mistakes”. “I feel an urge and a responsibility to correct the mistakes I have done in the past. I want to use my talents and skills in a positive way by spreading the truth about Islam. I am trying to make a new movie about Islam and the life of Prophet Muhammad (peace be upon him). It would show people what examples the Prophet set in his life and the  movie would invite younger  people to Islam.” With both the father and son now leading life as Muslims, the astonishing story was talked about by speakers and scholars even after the convention was over. Arnoud is now calling on people to support his Islamic Foundation, which is fighting Islamophobia in Europe. Having started the European Da`wah Foundation, Arnoud has come a full circle from his earlier days as a member of the right-wing anti-Islam Freedom Party. His team of volunteers works towards bridging the gap between Muslims and non-Muslims and helping people clear their misconceptions about Islam. Iskander now plans to take a trip to Saudi Arabia to perform `Umrah and hopes his mother would also embrace Islam soon. Watch such an overwhelming, incredibly touching moment here… _________________________ Source: khaleejtimes.com Read Also: Former Anti-Islam Advocate, Arnoud van Doorn, in Hajj Geert Wilders Party Member, Arnoud van Doorn, Accepts Islam