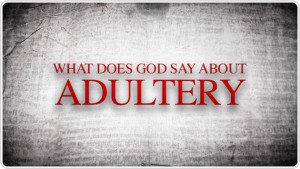 All divine religions prohibit extramarital affairs including fornication and adultery

In fact, all divine religions prohibit extramarital affairs including fornication and adultery. We observe that the prohibition of adultery is one of the Ten Commandments in the Torah. In the Bible, we read: “Thou shalt not commit adultery.” (Exodus 20:14)

The New Testament also states that adulterers are included in those people who will not inherit the Kingdom of God. We read the following verses in the New Testament:

Do not be deceived: neither the sexually immoral, nor idolaters, nor adulterers, nor men who practice homosexuality, nor thieves, nor the greedy, nor drunkards, nor revilers, nor swindlers will inherit the kingdom of God. And such were some of you. But you were washed, you were sanctified, you were justified in the name of the Lord Jesus Christ and by the Spirit of our God. (1 Corinthians 6:9-11 (ESV))

Prophet Muhammad listed the spread of adultery as one of the portents of the Hour (the end of the world). He said: “The Hour will not be established” or said: “From among the portents of the Hour is that the religious knowledge will be taken away (by the death of religious scholars) and general ignorance (of religion) will appear; and the drinking of alcoholic drinks will be very common, and (open) illegal sexual intercourse will prevail, and men will decrease in number while women will increase so much so that, for fifty women there will be only one man to look after them.” (Al-Bukhari)