The Merits of Reciting the Glorious Qur’an 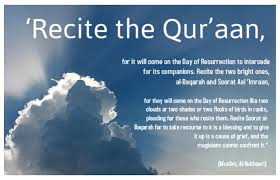 During the lifetime of the Prophet (peace be upon him), some unbelievers used to hide and listen to the Prophet while he was reciting the Glorious Qur’an.

Indeed, those who recite the Book of Allah and establish prayer and spend [in His cause] out of what We have provided them, secretly and publicly, [can] expect a profit that will never perish. That He may give them in full their rewards and increase for them of His bounty. Indeed, He is Forgiving and Appreciative. (Fatir 35:29-30)

The Glorious Qur’an, moreover, praises a group of the People of the Book, saying,

They are not [all] the same; among the People of the Scripture is a community standing [in obedience], reciting the verses of Allah during periods of the night and prostrating [in prayer]. (Aal `Imran 3:113)

The Sunnah, likewise, highlights the merits of reciting the Glorious Qur’an in more than one hadith. Following are some examples:

`A’ishah (may Allah be pleased with her) said that the Messenger of Allah (peace be upon him) said, “Whoever recites the Qur’an and masters it by heart, will be with the noble righteous scribes (in Heaven), and, whoever exerts himself to learn the Qur’an by heart, and recites it with great difficulty, will have a double reward.” (Al-Bukhari and Muslim)

Apparently, the person who recites the Glorious Qur’an with great difficulty will be rewarded twice as much as the person who reads it with ease as the former bears the burdens of reading while he is not well-versed in reciting the Qur’an, which is a sign of his determination to read the Book of Allah, Most High.

Abu Umamah (may Allah be pleased with him) said, “I heard the Messenger of Allah (peace be upon him) saying, “Read the Qur’an, for it will intercede on behalf of its readers on the Day of Judgment.” (Muslim)

Ibn Mas`ud (may Allah be pleased with him) said that the Messenger of Allah (peace be upon him) said,  “Whoever reads a single letter of the Book of Allah will be rewarded (as he has done a good deed) and his reward will be multiplied tenfold…” (Al-Tirmidhi)

Abu Hurayrah (may Allah be pleased with him) reported that the Messenger of Allah (peace be upon him) said, “There is no envy except in two: one who, having been given (knowledge of) the Qur’an by Allah, recites it during the night and day (and also acts upon it)… and a person, having been given wealth by Allah, spends it in the right way.” (Al-Bukhari)

“Envy” in the hadith means wishing to have the like of what another has, without the desire of any evil to the one he envies. This kind of envy is passable, which is contrary to the other abhorred kind, which includes the desire of evil to others.

`Abdullah ibn ‘Amr (may Allah be pleased with them both) reported that the Prophet (peace be upon him) said, “(On the Day of Judgment,) it will be said to the reciter of the Qur’an, ‘Read (the Qur’an) and occupy higher degrees. Recite (the Qur’an) as you used to recite it in the world, for your position will be at the end of the last Qur’anic verse you read.” (Abu Dawud)

And those who disbelieve say, “Do not listen to this Qur’an and speak noisily during [the recitation of] it that perhaps you will overcome.” (Fussilat 41:26)

Indeed, Allah orders justice and good conduct and giving to relatives and forbids immorality and bad conduct and oppression. He admonishes you that perhaps you will be reminded. (An-Nahl 16:90)

Thereupon, AI-Mughirah asked the Prophet (peace be upon him) to read the same Qur’anic verse once more. On hearing the recitation of that verse again, AI-Mughirah commented, “By Allah! This (speech) has sweetness, is covered with elegance … and it is not the saying of a human being.”(Al-Bayhaqi)

On hearing the Glorious Qur’an, the Jinn said, as the Qur’an states,

‘Indeed, we have heard an amazing Qur’an. It guides to the right course, and we have believed in it. And we will never associate with our Lord anyone. (AI-Jinn 72:1-2)

Lately, Dr. Ahmad AI-Qadi and some Muslim physicians conducted some experiments on a number of patients, including Muslims, non-Muslims, Arab, and non-Arab, to monitor the influence of the Glorious Qur’an on them. After listening to the Qur’an, the conclusions, however, proved to be amazing. The Glorious Qur’an had a positive influence on all of them irrespective of their religion or language. Yet, degrees of influence have differed according to some criteria such as language and religion. No wonder, the Glorious Qur’an enjoys this influential characteristic for it is the Word of Allah, Most High.

Source: Taken from Al-Qaradawi’s book “How to Approach the Qur’an”