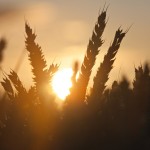 Both Christians and Muslims believe that Mary was blessed. In the New Testament, we read the following verse: “And the angel being come in, said unto her: Hail, full of grace, the Lord is with thee: blessed art thou among women.” (Luke 1:28)

So her Lord accepted her with good acceptance and caused her to grow in a good manner and put her in the care of Zechariah. Every time Zechariah entered upon her in the prayer chamber, he found with her provision. He said, ‘O Mary, from where is this [coming] to you?’ She said, ‘It is from Allah. Indeed, Allah provides for whom He wills without account.’ (Aal `Imran 3:37)

And [mention] when the angels said, ‘O Mary, indeed Allah has chosen you and purified you and chosen you above the women of the worlds.’” (Aal `Imran 3:42)

And in the sixth month, the angel Gabriel was sent from God into a city of Galilee, called Nazareth,

To a virgin espoused to a man whose name was Joseph, of the house of David; and the virgin’s name was Mary.

And the angel being come in, said unto her: Hail, full of grace, the Lord is with thee: blessed art thou among women.

Who having heard, was troubled at his saying, and thought with herself what manner of salutation this should be.

And the angel said to her: Fear not, Mary, for thou hast found grace with God.

He shall be great, and shall be called the Son of the most High; and the Lord God shall give unto him the throne of David his father; and he shall reign in the house of Jacob forever.

And of his kingdom there shall be no end.

And Mary said to the angel: How shall this be done, because I know not man?

And the angel answering, said to her: The Holy Ghost shall come upon thee, and the power of the most High shall overshadow thee. And therefore also the Holy which shall be born of thee shall be called the Son of God.

And behold thy cousin Elizabeth, she also hath conceived a son in her old age; and this is the sixth month with her that is called barren:

Because no word shall be impossible with God.

And Mary said: Behold the handmaid of the Lord; be it done to me according to thy word. And the angel departed from her. (Luke 1:26-38)

In the Qur’an, we read the following verses about the glad tidings about Jesus:

[And mention] when the angels said, “O Mary, indeed Allah gives you good tidings of a word from Him, whose name will be the Messiah, Jesus, the son of Mary – distinguished in this world and the Hereafter and among those brought near [to Allah ]. He will speak to the people in the cradle and in maturity and will be of the righteous.” She said, “My Lord, how will I have a child when no man has touched me?” [The angel] said, “Such is Allah; He creates what He wills. When He decrees a matter, He only says to it, ‘Be,’ and it is. And He will teach him writing and wisdom and the Torah and the Gospel And [make him] a messenger to the Children of Israel, [who will say], ‘Indeed I have come to you with a sign from your Lord in that I design for you from clay [that which is] like the form of a bird, then I breathe into it and it becomes a bird by permission of Allah . And I cure the blind and the leper, and I give life to the dead – by permission of Allah . And I inform you of what you eat and what you store in your houses. Indeed in that is a sign for you, if you are believers. And [I have come] confirming what was before me of the Torah and to make lawful for you some of what was forbidden to you. And I have come to you with a sign from your Lord, so fear Allah and obey me. Indeed, Allah is my Lord and your Lord, so worship Him. That is the straight path.” (Aal `Imran 3:42-51)

Both Christians and Muslims believe that Jesus was such a word and spirit from God, which was breathed into the womb of Mary.

“The Word became flesh and made his dwelling among us. We have seen his glory, the glory of the one and only Son, who came from the Father, full of grace and truth.” (John 1:14)

In the Qur’an, we find the following verse:

The Messiah, Jesus, the son of Mary, was but a messenger of Allah and His word which He directed to Mary and a soul [created at a command] from Him. (An-Nisaa’ 4:171)

Now we are to shift to the differences between Christians and Muslims. The Qur’an states that Mary believed in the words of her Lord (Allah) and His scriptures and was devoutly obedient. Allah says:

The Messiah, son of Mary, was not but a messenger; [other] messengers have passed on before him. And his mother was a supporter of truth. They both used to eat food. Look how We make clear to them the signs; then look how they are deluded. (Al-Ma’idah 5:75)

However, the New Testament tells us that Mary gave birth to God and she believed in Jesus as her Lord. In the New Testament, we read the following verses: “And Mary said, My soul doth magnify the Lord, And my spirit hath rejoiced in God my Saviour. For he hath regarded the low estate of his handmaiden: for, behold, from henceforth all generations shall call me blessed.” (Luke 1:46-48)

Finally, it is safe to say that, unlike Jews, both Christians and Muslims hold Mary in high esteem. However, Christians believe that Mary was the mother of God, but Muslims think that she was only the mother of a servant, Prophet and Messenger of Allah.