The Ka`bah: Manifestation of Monotheism or Idolatry 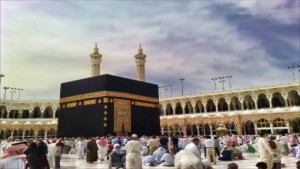 Muslims observe the rites of Hajj as a kind of worshiping Allah and submitting to His orders, and nothing of their worship is directed to the Black Stone or the Ka`bah

Some falsifiers claim that Muslims sanctify the Ka`bah by circumambulating it, which implies an aspect of idolatry in Islam. They maintain that the Black Stone was one of the idols around the Ka`bah but it remained after the Islamic conquest of Mecca. By so doing, Muslims are not better than the ignorant disbelievers who believed that the worship of idols and stones would bring them closer to God. Moreover, they stated that Muhammad was inspired by the pagan customs of the infidels when he put the rituals of his religion and he made the Ka`bah, being a man-made building, the center of these rituals by directing to it in prayer and going to it in Hajj. They inquire, “If Islam is a monotheistic religion, why does it allow the sanctification of the Ka`bah and the Black Stone as well as other rites of Hajj?”

In fact, Muslims observe the rites of Hajj as a kind of worshipping Allah and submitting to His orders, and nothing of their worship is directed to the Black Stone or the Ka`bah by means of fear or hope because this is only for Allah, the Almighty.

The concept of worship in Islam includes the meanings of submission, humbleness and obedience with a belief that the worshipped has an unseen authority that has effect in the reality. The worshipper seeks to always get closer to the one he is worshipping in order to gain a benefit or fend off an evil. Also, he thinks that neglecting the worship incurs harm and punishment whether in this life or in the hereafter and thus he should submit to the worshipped by obeying his orders and avoiding his prohibitions.

Hence, we can easily understand from the meaning of worship that Muslims worship neither the Ka`bah nor the Black Stone because they do not submit or humble themselves to them but they respect and hold them in high esteem. Moreover, they do not receive religious orders from the Ka`bah or the Black Stone. Kissing and respect have nothing with worship, in this particular case, because Muslims while doing so have faith that nothing can harm or benefit but Allah Alone. They deny any self-authority of these things. In addition, they believe that the relationship between the creator and the created is direct and has no intermediates, and that worshippers are not in need to resort to anything to bring them close to Almighty Allah. They believe that doing so is a kind of major Shirk (ascribing partners to Allah in worship) that gets one out of religion.

It is useful here to state that the one who first performed Hajj was Prophet Ibrahim (Abraham, peace be upon him) whom Allah commanded to proclaim Hajj to people. Almighty Allah says,

And proclaim to the people the Hajj [Hajj]; they will come to you on foot and on every lean camel; they will come from every distant pass. That they may witness benefits for themselves and mention the name of Allah on known days over what He has provided for them of [sacrificial] animals. So eat of them and feed the miserable and poor. (Al-Hajj 22:27-28)

So, Prophet Ibrahim was the one who first performed Hajj and he also was the one who destroyed the idols and made them into fragments and revived the religion of monotheism. Allah (Glory be to Him) says,

Then We revealed to you, [O Muhammad], to follow the religion of Abraham, inclining toward truth; and he was not of those who associate with Allah. (An-Nahl 16:123)

The people of the pre-Islamic era of ignorance added some pagan rites and inadmissible ceremonies to Hajj such as circumambulating the Ka`bah naked and staining the Ka`bah with the blood of the sacrificial animals believing that this would bring them close to Allah. Islam came and removed all these deviated customs and rites. Abu Bakr declared in the ninth year of Hijrah, “No polytheist would circumambulate the Ka`bah and no one would go around the house naked.” (Al-Bukhari)

In fact, the matter of worship depends upon two main issues: perfect love and perfect submission. Love without submission or submission without love is not worship.

There is no doubt that all the rites of Hajj are directed to Allah not to the Ka`bah or the Black Stone. Moreover, it is known that anyone who worships something believes that it is better than him while we find that the Prophet (peace be upon him) said referring to the Ka`bah, “How glorified and sacred be you! However, the believer is more sacred than you.” (Al-Tirmidhi)

Finally, we need to refer here to the fact that the Arabs had idols before Islam and they put a lot of idols around the Ka`bah but it was never reported that they worshipped the Ka`bah or the Black Stone but they only hold them in high esteem and considered them some of remains of Ibrahim. So, it is false to claim that Muhammad conveyed the worship of these stones to his new religion of Islam.