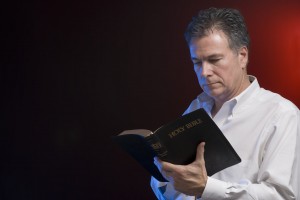 The mystery of the pre-existence of the spirits of the Prophets has not been revealed to us, but every true Muslim believes it.

1- According to the testimony of Jesus, no man born of woman was ever greater than John the Baptist. But the “least” in the Kingdom of Heaven is greater than John. The comparison made by the “Spirit of Allah” (i.e. Jesus) is between John and all the preceding Prophets as the officers and administrators of the Kingdom of Heaven. Now in chronological order, the last Prophet would be the least of them all, he would be their junior and their youngest. The word “z’ira” in the Aramaic, like the Arabic “saghir,” signifies “little, small and young.” The Pshittha Version uses the word “z’ira” or “z’eira” in apposition to “rabba” for “great or old.” Every Christian will admit that Jesus is not the “last” Prophet, and therefore he cannot be the “least.” Not only were the Apostles themselves endowed with the gift of prophecy, but also many other holy men in the apostolic age were favored with it (Acts xi. 27, 28; xiii. I; xv.32; xxi, 9, 10, etc).

And as we cannot determine which of these numerous Church Prophets was the “last, we are naturally forced to seek elsewhere a Prophet who is indisputably the Last and the Seal of the Prophetic List. Can we imagine stronger and more brilliant evidence in favor of Muhammad than the fulfillment, in his holy person, of this wonderful prophecy of Jesus Christ?

In the long list of the prophetic family, certainly the “youngest,” the “least” is Muhammad; he is the “Benjamin” of the Prophets; yet he is their Sultan, their “Adon” and their “Glory.” Denyingthe prophetical and apostolic character and nature of Muhammad’s mission is a fundamental denial of the whole Divine Revelation and all the Prophets who preached it. If all other Prophets put together, they do not accomplish the gigantic work which the Prophet of Mecca did alone in the short period of twenty-three years of his apostolic mission.

There is a remarkable chapter about John the Baptist in the well-known book of Ernest Renan on La vie de Jesus. Long ago, I carefully read this work. If the learned French writer had the least consideration for Muhammad’s claim in the world of Prophets, I am sure his profound investigations and comments would have led him entirely to a different conclusion. He, like all other dissident and Biblical critics, instead of finding out the truth, criticizes religion adversely and leads his readers to skepticism.

I am happy to say that it is my privilege, by the grace of Allah, to solve the problem, to ring up the curtain of mystery which has covered the true sense and meaning of “the Least in the Kingdom of Heaven!”

2. John the Baptist recognizes Muhammad as superior as and more powerful than himself. That significant expression made to the Jewish multitudes, “He that cometh after me” reminded their Scribes, Pharisees, and lawyers of the ancient prophecy of their great ancestor Jacob, in which that patriarch uses the unique title of “Shilokhah” for the “Rasul Allah,” the epithet frequently used by Jesus for Muhammad as preserved in the Gospel of Barnabas. At the time of writing my article on the “Shiloh”1  I said that the word might be a corruption of “shiloukh” or “Shilokhah,”2 which means the Apostle of Allah, but I did not then recollect that St. Jerome, as well, had understood the Hebrew from in that sense, for he has translated it as“quimittendis est.”

We have only an epitome of John’s sermon in a few lines, written not by himself but by an unknown hand -at least not in his own original tongue- and much tampered with by transcribers and redactors who had already made his disciple Jesus an idol or a god.

But when we come to compare this sermon preached in the wilderness of Judea and on the shores of the Jordan with the marvelous grace, elegance, eloquence, and power so manifest in every verse and page of the Glorious Qur’an, we understand the sense of the words, “He is more powerful than I!”

When I picture to myself the ascetic Baptist preaching aloud in the wilderness, or on the banks of the Jordan, to the masses of the Jewish believers, with a theocratic history of some four thousand years old behind them, and then make a brief review of the quiet, orderly, and dignified manner in which Muhammad proclaimed his celestial verses of the Qur’an to the unbelieving Arab pagans; and, finally, when I examine and behold the effect of the two cases of preaching upon the hearers and the final result, I understand the magnitude of the contrast between them, and of the significance of the words “He is more powerful than I!”

When I contemplate the seizure and imprisonment of the helpless Baptist by Herod Antipas3 and his cruel decapitation -or when I peruse the confused but tragical accounts of the flagellation of Jesus (or Judah Ishariot) by Pilate, his coronation with a crown of thorns by Herod, and the catastrophe upon the Calvary- and then turn my eyes upon the triumphal entry of the great Adon – the Sultan of the Prophets – into Mecca, the total destruction of all the ancient idols and the purification of the Holy Ka’ba; upon the thrilling scene of the vanquished deadly enemy headed by Abu Sufyan at the feet of the victorious Shilohah- the Apostle of Allah –begging his clemency and making the profession of faith; and upon the glorious worship, devotion, and the final sermon of the Seal of the Prophets in these solemn Divine words: “Al-yauma akmaltu lakum dinakum” (“Today I have completed for you your religion”), etc., then I fully understand the weight and value of the Baptist’s confession, “He is more powerful than I!”

2-    The Oriental Hebrews and Assyrians pronounce the word “Shilokah” or“Shiloakh.” It is very difficult to write or transliterate the Semitic languages in theLatin characters. (the author).

3-    There is anachronism in the account of John’s martyrdom concerning the family of Herod the Great in the Gospels (Matt. xiv, etc.); the reader can consult the Antiquities of Joseph Flavius. (the author).