The Holy Spirit in Islam and Christianity 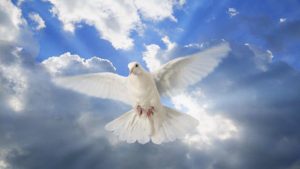 It is the Holy Spirit. It is such a being who perplexed the followers of the Abrahamic religions for there is no consensus over the Holy Spirit’s status: if he is God or an angel or what?

Each Abrahamic religion has its own conception of this unusual being. It is impossible to reconcile those conceptions given the considerable disparity among them.

Let’s consider the nature of this being in the light of the Qur’an on the one hand and the Bible including the Old Testament and the New Testament on the other hand.

The Holy Spirit in Islam

In Islam, the Holy Spirit is Gabriel, who is an angel of God. He is sometimes mentioned by the name “Gabriel”, whereas he is sometimes referred to, inter alia, as “Holy Spirit”.

He is exclusively named “Holy Spirit” to the exclusion of the other angels given his central role in the revelation of the Holy Scriptures and his support of the prophets of God and godly people.

Scholars sought to account for “Spirit” as an exclusive name of Gabriel unlike the other angels. Al-Jayyani remarked: “he was called ‘Spirit’ for selves are livened by him just as they are livened by spirits.”

Ar-Razi followed by Ibn `Adil noted: “he was called ‘Spirit’ for he was created from God’s Spirit.” It is said that he is given this name “for he represents salvation for all creation in terms of judgment. So he is like a spirit which gives life.” It is also said “for he is wholly a spirit unlike the human beings who have both bodies and spirits.” He is called “trustworthy” for he was entrusted with the revelations conveyed to prophets and others.

About bringing the Qur’an down by Gabriel, we read in the Qur’an:

Say, “Whoever is an enemy to Gabriel – it is [none but] he who has brought the Qur’an down upon your heart, [O Muhammad], by permission of Allah, confirming that which was before it and as guidance and good tidings for the believers.” (Al-Baqarah 2:97)

About his support of Prophet Muhammad, we also read:

If you two [wives] repent to Allah, [it is best], for your hearts have deviated. But if you cooperate against him – then indeed Allah is his protector, and Gabriel and the righteous of the believers and the angels, moreover, are [his] assistants. (At-Tahrim 66:4)

About bringing the Qur’an down by the Holy Spirit, we read in the Qur’an:

About his support of prophets and messengers, we also read:

And We did certainly give Moses the Torah and followed up after him with messengers. And We gave Jesus, the son of Mary, clear proofs and supported him with the Holy Spirit. (Al-Baqarah 2:87)

About the Holy Spirit giving life from and with the permission of God, the Qur’an tells us that he played a role in Lady Mary’s pregnancy with Jesus. In the Qur’an, we read:

And she took, in seclusion from them, a screen. Then We sent to her Our Spirit, and he represented himself to her as a well-proportioned man. She said, “Indeed, I seek refuge in the Most Merciful from you, [so leave me], if you should be fearing of Allah.” He said, “I am only the messenger of your Lord to give you [news of] a pure boy.” (Maryam 19:17-19)

About the Holy Spirit being salvation for all creation in terms of judgment, we also read:

The Holy Spirit in Christianity

In the Old Testament, we notice that the Holy Spirit is not set up as God. He is rather portrayed as God’s Spirit that supports the believers. However, the Old Testament suggests incarnation, immanentism and pantheism, which are not endorsed by Islam.

In the Old Testament, we read about the Holy Spirit: “Create in me a clean heart, O God, and renew a right and steadfast spirit within me. Do not cast me away from Your presence And do not take Your Holy Spirit from me.” (Psalm 51:10-11)

We also read: “But they rebelled and grieved His Holy Spirit; therefore He turned Himself to become their enemy, he fought against them. Then His people remembered the days of old, of Moses. Where is He who brought them up out of the sea with the shepherds of His flock? Where is He who put His Holy Spirit in the midst of them.” (Isaiah 63:10-11)

In the New Testament, we read: Now the birth of Jesus Christ was as follows: when His mother Mary had been betrothed to Joseph, before they came together she was found to be with child by [the power of] the Holy Spirit. And Joseph her [promised] husband, being a just and righteous man and not wanting to expose her publicly to shame, planned to send her away and divorce her quietly. But after he had considered this, an angel of the Lord appeared to him in a dream, saying, “Joseph, descendant of David, do not be afraid to take Mary as your wife, for the Child who has been conceived in her is of the Holy Spirit…” (Matthew 1:18-20)

According to the above verses from the New Testament, it is safe to say that if we take incarnation immanentism and pantheism for granted, it is Jesus who proceeded from the Holy Spirit not vice versa.

In consideration of the foregoing, if we concede that the Holy Trinity is right, the order of persons should go as follows: the Father, then the Holy Spirit, and then the Son.

However, even the verses interpreted as implying the Holy Trinity in the New Testament involve flagrant contradictions. For example, we read: Jesus came near and spoke to them, “I’ve received all authority in heaven and on earth. Therefore, go and make disciples of all nations, baptizing them in the name of the Father and of the Son and of the Holy Spirit.” (Matthew 28:18-19)

If Jesus really ordered baptism in the name of the Father, the Son and the Holy Spirit, does that mean that they are gods or persons of the same god?

We may also wonder: “where does the Bible explicitly state that the Holy Spirit is God or the third of three persons or proceeded from the Father and/or the son altogether?”

Difference between the Holy Spirit and God’s Spirit

Just as the conception of the Holy Spirit differs in the current scriptures of the Abrahamic religions, that of God’s Spirit also differs.

For example, about God’s Spirit, we read in the Old Testament: But Moses replied, “Are you jealous for my sake? I wish that all the LORD’s people were prophets and that the LORD would put his Spirit on them!” (Numbers 11:29)

As for the New Testament, there is no difference between the Holy Spirit and God’s Spirit either. They are synonymously used. For example, we read in the New Testament: “When Jesus was baptized, he immediately came up out of the water. Heaven was opened to him, and he saw the Spirit of God coming down like a dove and resting on him.” (Matthew 3:16)

In the Qur’an, the word “Spirit” is used with “God” to give different meanings as follows:

1- To stand for God Himself or one of His attributes. For example, God says that He blew into Adam from His Spirit, i.e. from Himself or from His ability. In the Qur’an, we read:

And when I have proportioned him and breathed into him of My Spirit, then fall down to him in prostration.” (Al-Hijr 15:29)

Also, God says that He blew into Mary from His Spirit, i.e. from Himself or from His ability. In the Qur’an, we read:

And [mention] the one who guarded her chastity, so We blew into her [garment] from Our Spirit, and We made her and her son a sign for the worlds. (Al-Anbiya 21:91)

And [the example of] Mary, the daughter of ‘Imran, who guarded her chastity, so We blew into her [garment] from Our Spirit, and she believed in the words of her Lord and His scriptures and was of the devoutly obedient. (At-Tahrim 66:12)

2- To stand for the Holy Spirit, namely Angel Gabriel. For example, we read in the Qur’an:

And she took, in seclusion from them, a screen. Then We sent to her Our Spirit, and he represented himself to her as a well-proportioned man. (Maryam 19:17)

For such He has written Faith in their hearts, and strengthened them with a spirit from Himself. (Al-Mujadilah 58:22)

3- To stand for Jesus. For example, we read in the Qur’an:

To conclude, the Holy Spirit and God’s Spirit in the Old Testament have the same meaning, namely, the Holy Spirit, that is not separate from God, but it is His Spirit thereby He supports His godly servants.

Yet, in the Qur’an, God’s Spirit is not necessarily the Holy Spirit who is Gabriel. Rather, it stands for God Himself, one of His attributes or Jesus Christ.