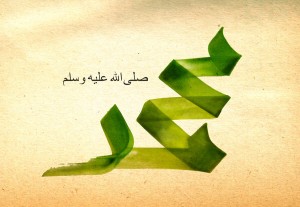 He is Muhammad son of Abdullah. He was chosen by Allah as the final Prophet sent to mankind. Allah chose him to be the representative and living example of the final revelation.

He is Muhammad son of Abdullah. He was chosen by Allah as the final Prophet sent to mankind. Allah chose him to be the representative and living example of the final revelation. We all should love and respect him. The Prophet Muhammad (peace be upon him) is not considered to be divine but he, as all other Prophets, is a human being. However, he is seen as the most perfect of human beings, shining like a diamond amongst coal.

He was born in Makkah in 570, in the tribe of Quraish, one of the greatest tribes in Arabia that assumed leadership of Makkah. His father `Abdullah died when he was still in his mother’s womb. His mother Aminah died when he was 6 years old. He was then raised as an orphan by his grandfather `Abdul-Muttalib and later by his uncle Abu Talib. The young Muhammad displayed exceptional virtues as a respected truthful young man whom members of various tribes would invite to act as arbitrator in their disputes. He was actually nicknamed years before his Prophethood as “Al-Amin” which means the honest and trustworthy.

Allah, the Almighty, protected him from the evils of the Arab way of life such as drinking alcohol, fornication, theft, murder and so on. He worked as a shepherd with his family in his early years. When he (peace be upon him) reached 25 years, he worked as a merchant for a very special woman named Khadijah. She had been married and widowed twice and she was known for her noble characteristics, such as intelligence, good character, beauty and wealth from her business. She was 40 years old and found an attraction to the honesty and sincerity in the character of Muhammad (peace be upon him). She sent someone to talk to him concerning the subject of marriage. He accepted and they were shortly thereafter married. Khadijah was the first wife of the Prophet (peace be upon him) from whom all his daughters were born. They were married for 24 years until she passed at age 64.

Back in those days, the Arabs practiced many forms of idolatry, each tribe keeping its own idols at the Ka`bah. Sadly, the monotheistic message of Abraham had long become corrupted and forgotten among the general population of the Arabian Peninsula. The Prophet Muhammad (peace be upon him), however, was a believer in One God, and all of his life he never participated in the idolatrous practices of his people. He became bothered with the lifestyle of Makkah; its idol worshipping, superstitions and indulging in worldly lusts and pleasures. Because of this uneasiness, he made a habit of going into seclusion in the nearby mountains of Makkah fasting and praying to the Almighty God and seeking peace of mind. While going on these seclusions, the trees and rocks would say “Peace be upon you”. Startled he would turn and find nothing but rocks and trees.

When he reached forty years old, during one of the retreats of spiritual seclusion in the month of Ramadan, Muhammad (peace be upon him) first saw the Angel Gabriel who revealed to him the first portion of Allah’s Word to him. He told him what is translated “Read” or “Recite”, but Muhammad replied to the same request three times “I can’t read”. Then, Gabriel revealed to him the first five verses of the Qur’an and told him that he is the final Messenger of Allah to the whole of mankind.

Read in the name of your Lord, who created (everything). He creates the human being from a small lump of cells clinging to the womb. Read and your Lord is the Most Generous. He is the one who taught man to use the pen. He taught man that which he did not know. (Al-`Alaq 96:1-5)

After receiving this startling revelation, anyone would be confused and concerned. The Prophet (peace be upon him) went to his wife shaking from awe. She wrapped him in a blanket and he informed her of the extraordinary events which had taken place. She knew very well about the Prophet’s (peace be upon him) outstanding morals and character as well as his honesty and trustworthiness. She immediately proclaimed her faith to him saying: “Never would Allah allow you to be affected by any evil! Truly you are dutiful to your family, you are concerned with helping others, you give to the needy, you are most hospitable to your guests, and you are known for speaking the truth and supporting others when they speak the truth”. (Al-Bukhari)

She was the first person to believe in the Prophethood of Muhammad (peace be upon him). She had a cousin who was a Christian and had knowledge of Angels and revelation. So, they left to ask her Christian cousin Waraqah ibn Nawfal about this extraordinary occurrence. They told Waraqah what happened and he replied: “Indeed you are the final Prophet (peace be upon him) sent to mankind. Truly, it was the Angel Gabriel who has come to you. Be sure that your people will deny you, attack you, expel you from Makkah and try to kill you.” (Al-Bukhari)

The Prophet (peace be upon him) was amazed at these statements because he was from the highly respected tribe of `Abdul-Muttalib, which was well-known among the Arabs. Waraqah assured him about these realities. “No Prophet was sent with a message except the people gathered to fight him. And if I live to see that day, I will fight them with you.” (Muslim)